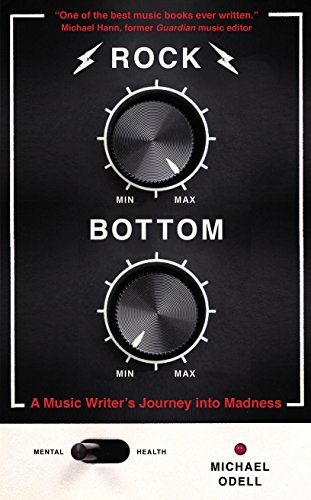 Now in paperback - a tale of loving, living and surviving rock music.

'One of the best music books ever written, because Michael Odell knows
music isn't about the musicians - it's about what it does to the listener, even
if what it does ends up being wholly disastrous. It's sad, funny, fascinating
and wise.' Michael Hann, former Guardian music editor

'Hilarious and disarmingly honest; a journey into the neurosis of rock
fame, but through doors you don't expect.' Rachel Joyce, author of The Unlikely
Pilgrimage of Harold Fry

A tale of loving, living and surviving rock music

Michael Odell is a rock music writer who takes his responsibility as
cultural gatekeeper seriously; he asks rock stars the forbidden questions to
discover whether they're worthy of readers' admiration.

But after interviewing Mick Jagger and Keith Richards - two of the 'Big Six'
icons - Michael is depressed. He has a public meltdown while chaperoning Oasis
at an awards ceremony; he's lost joy in his bathroom full of rock'n'roll
memorabilia; and his young son is in trouble at school for emulating rock star
behaviour.

Reluctantly Michael consults Mrs Henckel, a no-nonsense therapist with zero
experience of pop culture. As Michael addresses his feelings about the past, in
particular his failed teenage band, Mental Elf, he's forced to confront the
question: is it finally time to grow up and forget rock'n'roll?

Hilarious and disarmingly honest; a journey into the neurosis of rock fame, but through doors you don't expect. -- Rachel Joyce, author of The Unlikely Pilgrimage of Harold Fry
Rock Bottom is one of the best music books ever written, because Michael Odell knows music isn't about the musicians - it's about what it does to the listener, even if what it does ends up being wholly disastrous. It's sad, funny, fascinating and wise. And everyone who ever claimed a record changed their life should read it, and then think again. -- Michael Hann, former Guardian music editor
One of the funniest books I've ever read. Ultimately a moving and very tender look at modern masculinity. -- Marian Keyes

Please don't put your life in the hands of a rock 'n' roll band, who'll throw it all away. So advised Noel Gallagher in 1995 and Michael Odell ignored him anyway ...

One of Britain's most fearless rock interrogators, Odell turns his merciless searchlight on himself in this wry, compelling odyssey into the heart of his own - and rock n roll's - madness. Larks with the legends are all here (Bowie, McCartney, Mick 'n' Keef ... Michael Buble) but it's his inner life which illuminates, his psyche traumatically crumbling as he confronts his chaotic past.

Hilarious, tragic and timely, this is high farce in high (and low) places, uncovering why rock's lost highway is littered with the bodies of the righteous dreamers. Could it be because the music people are all mad? (Clue: yes.)

-- Sylvia Patterson, author of I'm Not with the Band
It's a fantastic book. A really new angle on rock. I've never read anything like it before and I've read a lot of music books. -- Dave Fanning, RTE Radio
A great book dealing with childhood friendships, failed idealism and those who got left behind. I would really recommend this book. -- The Afterword
[A] entertaining and offbeat mental health memoir. * The Bookseller *
Featuring highly enjoyable scenes with artists including Oasis, U2, Shakira and David Bowie, this is an extremely absorbing and well-written offering. * Sunday Business Post Dublin *
Michael Odell is a former contributing editor to Q magazine and has written about music for NME, the Guardian, the Independent and Spin, among others. Currently he does interviews and writes on family matters for The Times. He lives in Bristol.
GOR009429721
9781785783517
1785783513
Rock Bottom: A Music Writer's Journey into Madness by Michael Odell
Michael Odell
Used - Very Good
Paperback
Icon Books
20180607
384
N/A
Book picture is for illustrative purposes only, actual binding, cover or edition may vary.
This is a used book - there is no escaping the fact it has been read by someone else and it will show signs of wear and previous use. Overall we expect it to be in very good condition, but if you are not entirely satisfied please get in touch with us
Trustpilot