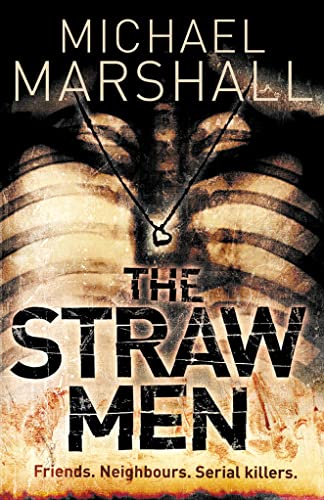 The Straw Men by Michael Marshall

The Straw Men is the most eagerly anticipated book of the year. Michael Marshall's unique voice adds a chilling intensity to the serial-killer plot, combining dazzling narrative, a white-hot pace and a deeply disturbing backdrop of conspiracy.

The Straw Men is the most eagerly anticipated book of the year. Michael Marshall's unique voice adds a chilling intensity to the serial-killer plot, combining dazzling narrative, a white-hot pace and a deeply disturbing backdrop of conspiracy.

Sarah tries to struggle, but the man holds her. The scream never makes it out of her throat. 'Nobody watching,' the man says with hateful calm. 'I made it this way. I can walk where nobody sees.'

Sarah Becker is the fifth girl to be abducted by this maniac. Judging from the state of the bodies that have been found, her long hair will be hacked off and she will be tortured. She has about a week to live.

Former LA homicide detective John Zandt has an inside track on the perpetrator - his own daughter was one of his victims two years ago.

But the key to Sarah's whereabouts lies with Ward Hopkins, a man with a past so secret not even he knows about it. His parents have just died in a car accident, but they leave Ward a bizarre message that leads him to question everything he once believed to be true.

As he begins to investigate his own past Ward finds himself drawn into the shadowy, sinister world of the Straw Men - and into the desperate race to find Sarah, before her time runs out

'Brilliantly plotted, stunningly written ... I read this ... in one go ... if this isn't a hit, I am a monkey's uncle. And I don't think I am'. Independent on Sunday

'The crucial thing about Michael Marshall Smith is that he is enormously readable... once you have started reading one of his books, you won't want to stop until you have finished it... He's in a class of his own... A master of ad absurdum gags [and] enough sensationally good throwaway wisecracks to fill a car park full of skips... He has the talent to become the inspiration to a generation of writers'
THE INDEPENDENT

Michael Marshall lives in north London with his wife Paula, and is currently working on screenplays and his next book, while providing two cats with somewhere warm and comfortable to sit.

GOR004148052
9780007151868
0007151861
The Straw Men (The Straw Men Trilogy, Book 1) by Michael Marshall
Michael Marshall
The Straw Men Trilogy
Used - Very Good
Paperback
HarperCollins Publishers
20020805
400
Short-listed for WH Smith Thumping Good Read Award 2003 Short-listed for WH Smith Thumping Good Read Book Award 2003
Book picture is for illustrative purposes only, actual binding, cover or edition may vary.
This is a used book - there is no escaping the fact it has been read by someone else and it will show signs of wear and previous use. Overall we expect it to be in very good condition, but if you are not entirely satisfied please get in touch with us
Trustpilot