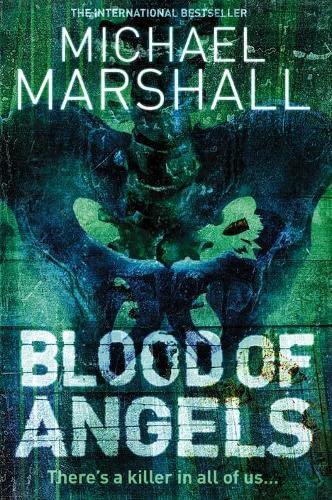 Blood of Angels by Michael Marshall

The tense and suspense-filled thriller from the author of THE STRAW MEN and THE LONELY DEAD.

The tense and suspense-filled thriller from the author of THE STRAW MEN and THE LONELY DEAD.

Since aiding in the capture of his brother, the serial killer known as the Upright Man, Ward Hopkins has been avoiding his demons holed up in a log cabin with his girlfriend, FBI agent Nina Baynam. But when Nina's boss turns up with an intriguing new serial-killer case for her, the couple realise they can't hide forever. Especially when they learn that the Upright Man has escaped from custody.

Ward's brother must have had help. The most likely candidates are the Straw Men, the shadowy organisation founded on murder as a way of life that killed Ward's parents. Former homicide cop John Zandt is obsessed with tracking them down following their murder of his daughter, and as he digs deeper he discovers extraordinary secrets about American history and society.

The shadows are gathering, and across America sinister forces are stirring. Only Ward, Nina and John stand against the Upright Man and his terrifying allies. It's just a question of when the next killings will start... and whether they will ever stop.

'Marshall is a cracker at writing tense, rich scenes' Observer

'The writing is assured and the plot carefully calibrated' Guardian

'Just when you think there's nothing new under the sun in the world of the suspense novel, along comes one hell of a nasty spider called The Straw Men. It's brilliantly written and scary as hell. Be the first on your block to stay up all night with this one; it's a masterpiece, reminding us that even paranoids really do have enemies.' STEPHEN KING

'A staggering, suspenseful journey through the darkness of American crime ... succeeds in revitalising the serial killer novel with assured gusto... A new beginning for a major British writer, whose crime debut instantly moves him into the Thomas Harris division' Guardian

'Brilliantly plotted, stunningly written ... I read this in one go ... if this isn't a hit, I am a monkey's uncle. And I don't think I am'. Independent on Sunday

Michael Marshall is a full-time writer. His novels include The Straw Men and Only Forward, and he also writes short stories and screenplays. Two of his earlier novels written under the name of Michael Marshall Smith, Spares and One of Us, have been optioned by major Hollywood studios. He lives in North London with his wife.

GOR004863783
9780007191499
0007191499
Blood of Angels (The Straw Men Trilogy, Book 3) by Michael Marshall
Michael Marshall
The Straw Men Trilogy
Used - Very Good
Paperback
HarperCollins Publishers
2005-05-23
432
N/A
Book picture is for illustrative purposes only, actual binding, cover or edition may vary.
This is a used book - there is no escaping the fact it has been read by someone else and it will show signs of wear and previous use. Overall we expect it to be in very good condition, but if you are not entirely satisfied please get in touch with us
Trustpilot