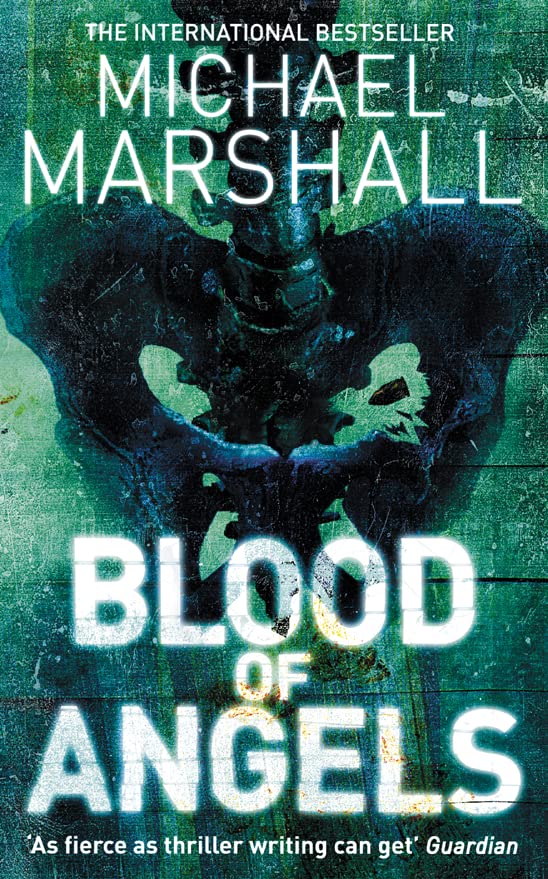 Blood of Angels by Michael Marshall

Tense and suspense-filled thriller from the author of The Straw Men and The Lonely Dead.

Tense and suspense-filled thriller from the author of The Straw Men and The Lonely Dead.

Notorious serial killer the Upright Man has escaped from a supermax prison. The FBI have no idea how it happened, or where to start looking. Ex-CIA agent Ward Hopkins suspects the Straw Men, a shadowy conspiracy of killers with a macabre agenda.

But apart from Ward's girlfriend Nina, a discredited federal agent, the only person who believes the Straw Men even exist is John Zandt, a homicide detective obsessed with tracking down his daughter's killers- and who is now wanted for murder himself.

The terrifying thing is that Ward's right- his brother was broken out for a reason. The Straw Men are planning something big.

And now only Ward, Nina and Zandt stand between them and a spectacular act of carnage...

'A definite page-turner - and a terrifying discourse on the nature of human eveil and the darkness among us ... this is as fierce as crime writing can get.' GUARDIAN

`The taut pace, crisp style and ever-present sense of menace are those of a top-drawer thriller' TELEGRAPH

`Marshall is a cracker at writing tense, rich scenes' OBSERVER

`Just when you think there's nothing new under the sun in the world of the suspense novel, along comes one hell of a nasty spider called The Straw Men. It's brilliantly written and scary as hell. Be the first on your block to stay up all night with this one; it's a masterpiece, reminding us that even paranoids really do have enemies.' STEPHEN KING

'A staggering, suspenseful journey through the darkness of American crime ... succeeds in revitalising the serial killer novel with assured gusto... A new beginning for a major British writer, whose crime debut instantly moves him into the Thomas Harris division' GUARDIAN

`Brilliantly plotted, stunningly written ... I read this in one go ... if this isn't a hit, I am a monkey's uncle. And I don't think I am'. INDEPENDENT ON SUNDAY

Michael Marshall is a full-time writer. His novels include `The Straw Men' and `The Lonely Dead', and he also writes short stories and screenplays. Two of his earlier novels written under the name of Michael Marshall Smith, `Spares' and `One of Us', have been optioned by major Hollywood studios. He lives in North London with his wife.

GOR000383846
9780007163977
0007163975
Blood of Angels (The Straw Men Trilogy, Book 3) by Michael Marshall
Michael Marshall
The Straw Men Trilogy
Used - Very Good
Paperback
HarperCollins Publishers
2006-01-30
560
N/A
Book picture is for illustrative purposes only, actual binding, cover or edition may vary.
This is a used book - there is no escaping the fact it has been read by someone else and it will show signs of wear and previous use. Overall we expect it to be in very good condition, but if you are not entirely satisfied please get in touch with us
Trustpilot