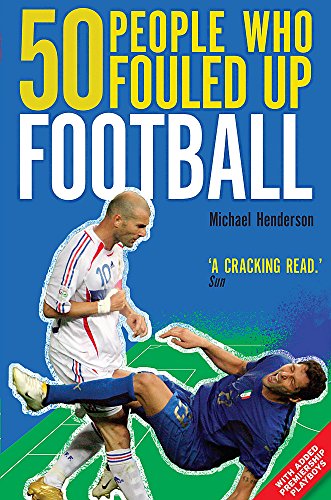 50 People Who Fouled Up Football by Michael Henderson

50 People Who Fouled Up Football by Michael Henderson

Despite its immense wealth, and the high public profile it enjoys, English football is not a land of milk and honey. The national side has won the World Cup only once when England staged the tournament in 1966 and the woeful performances in recent years would suggest that Sir Alf Ramsey's success will retain its unique status.

50 People Who Fouled Up Football casts a sceptical eye on the game in this country. It looks at the game as it really is, through the gaze of an outsider, who grew up loving the game but who has been turned off by the excesses of players, managers, broadcasters and fans, and increasingly by the rich men who own and run the clubs.

The big bang came in 1992, when the Premier League went its own merry way, aided by the millions that Sky television found to ease the passage. Now the game is richer, and can attract the world's leading stars, but it is poorer in spirit. The old football community means little to these Masters of the Universe. The old links between club and community have been ruined, and many players live in a different world, where they feel free to behave as they like.

The book names the guilty, who include those on the fringes of the game as well as the ones at the heart of it. Indignant in the right sense, it is a lament for a spoilt game, and a world that has vanished.

The 50 People are, in alphabetical order:

A cracking read that lovers of football's bygone era will relate to and enjoy. * The Sun *
[An] entertaining polemic ... likely to provoke passionate debate. * Daily Telegraph *
Outrageous and guaranteed to have the nerve ends raised from the first quirky page. * The Independent *
Pointed, intriguing and controversial but also humorous. * The Observer *
Good knockabout stuff written with wit and verve. -- Simon Redfern * Independent on Sunday Book of the Week *
A very enjoyable read. * Good Book Guide *
Michael Henderson was born in Lancashire, educated in Derbyshire, and lives in London. A well-known writer on sport, and the arts, he has worked for the Times, the Guardian, and the Daily Mail, and was cricket correspondent of the Daily Telegraph. He also writes about music for the Spectator. His interests include German music, Dutch paintings, Russian novels, American films, French wine and English ale.
GOR002041796
9781849012690
1849012695
50 People Who Fouled Up Football by Michael Henderson
Michael Henderson
Used - Very Good
Paperback
Little, Brown Book Group
2010-05-13
288
N/A
Book picture is for illustrative purposes only, actual binding, cover or edition may vary.
This is a used book - there is no escaping the fact it has been read by someone else and it will show signs of wear and previous use. Overall we expect it to be in very good condition, but if you are not entirely satisfied please get in touch with us
Trustpilot