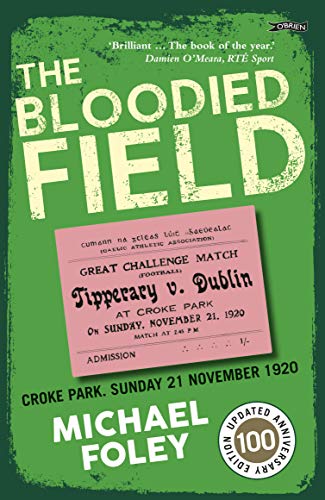 The Bloodied Field by Michael Foley

Bloody Sunday. A gaelic football match in Dublin's Croke Park became the scene of a massacre of 14 people by the Royal Irish Constabulary, following the IRA assassination of British military agents. Updated edition of this exceptional and prizewinning book.

On the morning of 21 November 1920, Jane Boyle walked to Sunday Mass in the church where she would be married five days later. That afternoon she went with her fiance to watch Tipperary and Dublin play a Gaelic football match at Croke Park. Across the city fourteen men lay dead in their beds after a synchronised IRA attack designed to cripple British intelligence services in Ireland. Trucks of police and military rumbled through the city streets as hundreds of people clamoured at the metal gates of Dublin Castle seeking refuge. Some of them were headed for Croke Park.

Award-winning journalist and author Michael Foley recounts the extraordinary story of Bloody Sunday in Croke Park and the 90 seconds of shooting that changed Ireland forever. In a deeply intimate portrait he tells for the first time the stories of those killed, the police and military personnel who were in Croke Park that day, and the families left shattered in its aftermath, all against the backdrop of a fierce conflict that stretched from the streets of Dublin and the hedgerows of Tipperary to the halls of Westminster.

Updated with new information and photographs.

Among the sports writing fraternity of the GAA, a healthy competition began rousing itself around 15 years ago, leading to over a decade of left-field 'concept' books and superb documenting of Gaelic Games. The trickle-down effect has emboldened many writers willing to experiment on their work. Each Christmas, Gaelic Games has a glut of sports books produced. For an indigenous sport and an amateur one at that, it is possibly even over-subscribed with capable authors. The high-water mark this Christmas, and for a few more, might just be reached by the release of Michael Foley's 'The Bloodied Field'... This is a rich book. It has soul and a beating heart and it stands alone as an astonishing, affecting piece of work. If you are in the habit of visiting Croke Park, you will never look at it again with the same eyes. Only greatness can achieve that effect. And this book is great

these victims have been rescued from obscurity in this fine book, which deserves its place in any collection on our founding struggle

Foley's award winning book from six years ago has become the foundation text of the commemoration ... definitive account of Bloody Sunday

a must-read for anyone interested in how the past can inform the present ... a book that transcends sport to open a window into the forces that shaped the birth of an Irish nation ... a vivid portrayal ... The Bloodied Field is a mainstream Irish sports book that deserves to be on the school curriculum

the critically acclaimed The Bloodied Field ... A familiar story told as never before.

Cork-born author Michael Foley appears to have mastered a particular genre of GAA book writing which requires considerable ability and attention to detail in order to be a success ... [he] has set a high standard that anyone else who dares to venture down this tricky path will find difficult to emulate

a must read for both GAA and Irish history buffs ... Foley's book is one that will be read for years to come, by both sports fans and history scholars'

one of the best Irish sports books of the year

for those of you who might think this is a history book, think again ... a very interesting read

Irish sport book of the year in my mind

a fantastic piece of work

a must read for all history and sporting folk

the book of the year in terms of sports books .... so well-written ... he takes you there ... I can't imagine too many better non-fiction books have been released this year in any genre

thanks to ... The Bloodied Field ... we now have a much more vivid and greater understanding of the frightening events that happened

the definitive history of the event

one of the stand-out books last year

A stunning read. Builds the suspense superbly during the day with personal accounts of all the main protagonists involved on Bloody Sunday and its aftermath. Michael Foley has done not just the GAA, but the country, a service in putting this book together. It is a film waiting to happen. Historical research of this nature could have been heavy and lost the interest of the reader quickly, but he takes his painstaking research and turns it into a gripping thriller. Just brilliant.

the definitive account of Bloody Sunday 1920 ... amazing ... phenomenally well put together ... one of the best books that I've read in a long time

I couldn't put it down ... a fabulous piece of work ... read like a thriller ... he builds the suspense superbly ... a testament to the brilliance of Michael Foley, one of our best sportswriters ... you can tell from the opening page he has absolutely nailed this book

the best ... a sports book, a history book, a thriller ... the writing is a treat ... Foley weaves every strand together with an expert hand for a book that makes everything else look unambitious

rarely has a sports book told you more about and Ireland at one moment in time ... probably the most exhaustively and best researched mainstream Irish sports book ever, yet reads like the best of historical novels

As the opening episode of this podcast lays out in brilliant detail, Bloody Sunday, November 21, 1920, is something we all think we know about, but few of us actually do. We know about it in broad strokes, but along the way the nuance has been lost. This podcast by the GAA - presented and written by Michael Foley of the Sunday Times - is an attempt to fill in the blanks of our collective memory about the events of that day, and about the people to whom it happened. Foley is uniquely well-placed to do so having literally written the book on the subject. His widely acclaimed The Bloodied Field is the inspiration for and source material for this timely podcast. Foley's skill is that he brings the events and the people to life, this is not some sort of dry academic exercise. The opening episode, focusses on the person of Michael Hogan, the Tipperary footballer and most famous victim of the massacre. It's genuinely moving to hear about Hogan the man and, even more poignantly, Hogan the child. Foley's retelling of Hogan's first day at school, helps humanise him, helps turn the name on the stand into something more tangible for the listener. An important piece of work

the definitive account of that tragic day. Reading Foley's book brought back for a modern audience the real lived experience of an event which had been lost in historical mythos

As said by many, The Bloodied Field book is a great piece of work if you haven't checked it out already

After tonight's Blood Sunday commemoration programme, one would imagine that the book, The Bloodied Field by @MickFoley76 will be on the sleigh from Lapland

Michael Foley's resonant tribute to the fallen...author of the definitive account of the day

A masterclass in storytelling

More crucial, however, has been work of writer Michael Foley whose terrific book, The Bloodied Field, has done much to inform and re-calibrate the GAA's approach to the challenge of commemoration ... the appearance of Foley's book that breathed life into those names that had been etched alongside Michael Hogan's in Croke Park in 1970. Who were these people, where and how did they live and what did they do? Who did they leave behind? The asking and answering of those questions has, undoubtedly, helped steer the current commemorative course. Moreover, it has, as Foley observes in the last episode of his riveting podcast series, allowed the GAA "to fully face and address the legacy of Bloody Sunday as it applied them". They have done so quietly and with dignity in recent years through a project that, with the assistance of relatives, has seen headstones erected on previously unmarked graves. And they have done so more recently in sponsoring a commemorative programme that is diverse, reflective, and informed by evidence

A seminal piece of work

* Irish Sun *
Originally from Killavullen, Co Cork, Michael Foley has written Kings of September, winner of the 2007 BoyleSports Irish Sportsbook of the year. He also ghostwrote Harte: Presence Is the Only Thing, the autobiography of Tyrone gaelic football manager Mickey Harte, shortlisted for the 2009 William Hill Irish Sportsbook of the Year. Winner of the GAA's McNamee Award in 2008 and shortlisted for Sports Journalist of the Year in 2003, he is acting sports editor and GAA correspondent for the Irish edition of the Sunday Times. This is his third book. He currently resides in Macroom, Co Cork.

1 The Boy with the Penny Package 45

PART IV THE BLOODY SUNDAY INQUIRIES AND THE SEARCH FOR TRUTH, 1920-1921

GOR010908459
9781788491969
1788491963
The Bloodied Field: Croke Park. Sunday 21 November 1920 by Michael Foley
Michael Foley
Used - Like New
Paperback
O'Brien Press Ltd
2020-07-06
352
Winner of Best GAA Publication 2015 (Ireland)
Book picture is for illustrative purposes only, actual binding, cover or edition may vary.
The book has been read, but looks new. The book cover has no visible wear, and the dust jacket is included if applicable. No missing or damaged pages, no tears, possible very minimal creasing, no underlining or highlighting of text, and no writing in the margins
Trustpilot