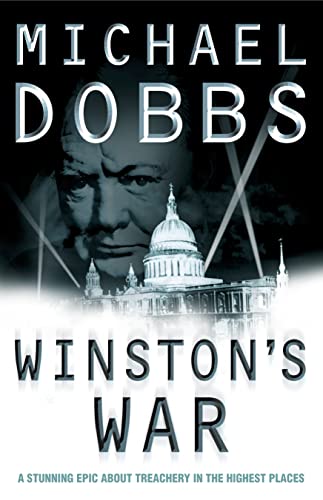 From a bestselling novelist with an unrivalled insight into the workings of power comes a compelling new novel exploring Winston Churchill's remarkable journey from the wilderness to No 10 Downing Street at the beginning of World War II.

From a bestselling novelist with an unrivalled insight into the workings of power comes a compelling new novel exploring Winston Churchill's remarkable journey from the wilderness to No 10 Downing Street at the beginning of World War II.

Saturday 1 October 1938. Winston Churchill has reached his lowest point. Reviled, mocked, accused of being nothing more than a drunken warmonger. Now his arch-rival, Neville Chamberlain, has done a deal with Hitler that destroys everything Churchill has fought for.

But the world is about to change. Churchill is visited by a young and unkempt BBC journalist who rebukes him for being defeatist. It proves to be a turning point. Churchill grows to like his young visitor, who rekindles his determination to fight on. What Churchill doesn't know is that the man from the BBC is also a leading Soviet spy. His name is Guy Burgess.

Now Michael Dobbs, one of the country's most acclaimed novelists, throws brilliant fresh light upon Churchill's relationship with Burgess and the twenty months of conspiracy, chance and outright treachery that propelled Churchill from outcast to messiah.

'A political thriller writer with a marvellous inside track knowledge of government.'
Daily Express

For two decades, Michael Dobbs has been at the right hand of political controversy. He was at Mrs Thatcher's side as she took her first step into Downing Street as Prime Minister, and was a key aide to John Major when he was voted out. In between times he was bombed in Brighton, banished from Chequers and blamed for failing to secure a Blair-Major television debate.

GOR001201075
9780007130184
000713018X
Winston's War by Michael Dobbs
Michael Dobbs
Used - Very Good
Paperback
HarperCollins Publishers
20021104
496
N/A
Book picture is for illustrative purposes only, actual binding, cover or edition may vary.
This is a used book - there is no escaping the fact it has been read by someone else and it will show signs of wear and previous use. Overall we expect it to be in very good condition, but if you are not entirely satisfied please get in touch with us
Trustpilot