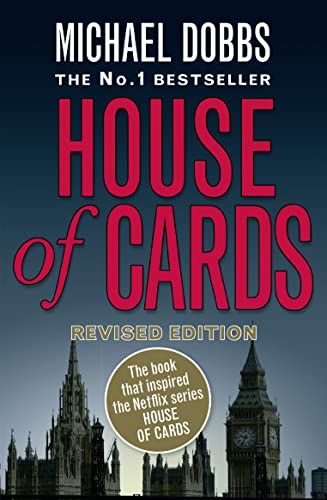 House of Cards by Michael Dobbs

House of Cards by Michael Dobbs

Michael Dobbs' entertaining tale of skulduggery and intrigue within the Palace of Westminster has been a huge hit with the public. Its scheming hero, Chief Whip Francis Urquhart, who uses fair means and foul to become Prime Minister, is one of the best-known characters of the last decade - the politician we all love to hate.

Acclaimed for its authenticity and insights into a secret world - the result of many years working behind the scenes for the Conservative Party - it became a highly popular, award-winning BBC TV series, with Francis Urquhart memorably portrayed by Ian Richardson, and was followed by two further sequels, `To Play the King' and `The Final Cut', which also became top-rating TV series.

`The exciting thriller that has Westminster buzzing. Here is a political thriller writer with a marvellous inside track knowledge of government. House of Cards is fast-moving, revelatory and brilliant.'
Daily Express

Michael Dobbs has carved out a unique niche as the country's leading political thriller writer, with a reputation for always being at the right hand of political controversy. In 1979 he was at Mrs Thatcher's side as she took her first step into Downing Street as Prime Minister, and in 1994 John Major appointed him Deputy Chairman of the Conservative Party. One newspaper described him as `Westminster's baby-faced hitman'.

GOR000373326
9780006176909
0006176909
House of Cards by Michael Dobbs
Michael Dobbs
Used - Very Good
Paperback
HarperCollins Publishers
1990-10-01
384
N/A
Book picture is for illustrative purposes only, actual binding, cover or edition may vary.
This is a used book - there is no escaping the fact it has been read by someone else and it will show signs of wear and previous use. Overall we expect it to be in very good condition, but if you are not entirely satisfied please get in touch with us
Trustpilot