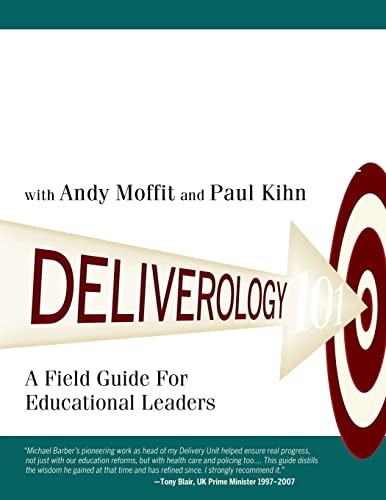 Deliverology 101: A Field Guide For Educational Leaders by Michael Barber

'Michael Barber's pioneering work as head of my Delivery Unit helped ensure real progress, not just with our education reforms, but with healthcare and policing too. It attracted worldwide attention. This guide distils the wisdom he gained at that time and has refined since. I strongly recommend it.' - Tony Blair, Former UK Prime Minister 1997-2007

A step-by-step approach to delivering results

Michael Barber, former chief advisor on delivery to British Prime Minister Tony Blair, and his colleagues Andy Moffit and Paul Kihn thoroughly describe Barber's proven reform delivery processes in this practical field guide. The timing is ideal, as Barack Obama's administration prioritizes education reform. Citing education reform case studies from more than 20 countries, the authors assert that most previous reforms were unsuccessful due to failed implementation. This book focuses on how to accomplish meaningful results, including:

- Excellence and equity across public education

The authors illustrate a field-tested program that ensures reform is achieved in the most profound sense, with students able to see, feel, and reap the benefits of a high-quality education. It is based not only on the experience of the Blair administration but also on case studies of successful implementation of reform in the U.S. and elsewhere.

Listen as Barber describes the importance of the book:

"Michael Barber has made a unique contribution to education reform by focusing firmly on how to get it done-delivery-as well as what to do. This book outlines steps that will enable courageous education leaders around the country to execute their plans and bridge the gap between hope and reality."
-- Joel Klein, Former Chancellor
"No one knows system reform better than Sir Michael Barber. No one delivers it better-up close and practical. His delivery contains bold, inspiring, crystal clear ideas, never more timely than today. A must read for reformers at all levels of the system."
-- Michael Fullan, Professor Emeritus
"Michael Barber's pioneering work as head of my Delivery Unit helped ensure real progress, not just with our education reforms, but with healthcare and policing too. It attracted worldwide attention. This guide distills the wisdom he gained at that time and has refined since. I strongly recommend it." -- Tony Blair, Former UK Prime Minister 1997-2007
Sir Michael Barber has been chief education advisor at Pearson since September 2011 and is the founder of Delivery Associates. In 2001, he founded the Prime Minister's Delivery Unit in No10, Downing Street, which he ran until 2005. In this role he was responsible for ensuring delivery of the government's domestic policy priorities across health, education, crime reduction, criminal justice, transport and immigration. The sustained focus on delivery from the heart of government, and the processes the PMDU developed, were a significant innovation in government, of interest to numerous other countries and global institutions such as the IMF and the World Bank. Tony Blair described the PMDU as "utterly invaluable." From 2005 to 2011 he was a partner at McKinsey and Company where he played a leading role in creating a public sector practice and founded the global education practice. In 2009 he founded, in Washington DC, the Education Delivery Institute, a not-for-profit organisation that works with more than a dozen US States to apply systematic delivery approaches to improving outcomes in schools and public higher education. Since 2009, on behalf of the British government, he has visited Pakistan over 30 times to oversee a radical and, so far, successful reform of the Punjab education system. He is the author of numerous books and articles, such as How to Run a Government published by Penguin in 2015 and Instruction to Deliver (Methuen 2008), which tells the story of his time in Downing Street, and was described by the Financial Times as "one of the best books about British government for many years." Deliverology 101 is the textbook on how to deliver in government and was written as the curriculum for the Education Delivery Institute. Andy Moffit is a Senior Practice Expert and a co-founder of McKinsey & Company's Global Education Practice. Moffit joined the firm in 2000 and has served clients in the financial services, non-profit and public sectors on a wide range of strategic and organizational issues. Since 2005, he has worked exclusively with education clients-large urban districts, state education departments, national foundations and nonprofits, and private companies-on large-scale reform and key strategic efforts. He is a frequent commentator at education sector conferences and publications. Moffit was an elementary school teacher in Houston, Texas from 1991-93 as a corps member of Teach For America. He is a graduate of the University of Michigan, Oxford University and Yale Law School, at which he studied education law and policy. He is based in McKinsey's Boston office. Paul Kihn is an Associate Principal in McKinsey and Company's Education Practice, where he specializes in human capital strategy, system transformation, and the delivery of large-scale reform. During his six years at McKinsey, Paul has worked with large urban school districts, local and national non-profits, and state and federal public sector agencies in K-12 and higher education. Prior to joining McKinsey, Paul worked as a public middle school teacher and administrator and community youth worker in South Africa, Ireland and New York City. He is a graduate of Yale College and Columbia University's Teachers College and Graduate School of Business. He lives in Washington, DC.
Preface Acknowledgments About the Authors How to Read This Field Guide Executive Summary 1. Develop a Foundation for Delivery 1A. Define Your Aspiration 1B. Review the Current State of Delivery 1C. Build the Delivery Unit 1D. Establish a Guiding Coalition 2. Understand the Delivery Challenge 2A. Evaluate Past and Present Performance 2B. Understand Drivers of Performance and Related System Activities 3. Plan for Delivery 3A. Determine Your Reform Strategy 3B. Set Targets and Trajectories 3C. Produce Delivery Plans 4. Drive Delivery 4A. Establish Routines to Drive and Monitor Performance 4B. Solve Problems Early and Rigorously 4C. Sustain and Continually Build Momentum 5. Create an Irreversible Delivery Culture 5A. Build System Capacity All the Time 5B. Communicate the Delivery Message 5C. Unleash the "Alchemy of Relationships" Frequently Asked Questions Glossary Appendix A1 Delivery Capacity Review Rubric Appendix A2 Assessment Framework Used by the Prime Minister's Delivery Unit References Index
GOR005933265
9781412989503
1412989507
Deliverology 101: A Field Guide For Educational Leaders by Michael Barber
Michael Barber
Used - Very Good
Paperback
SAGE Publications Inc
2010-12-21
304
N/A
Book picture is for illustrative purposes only, actual binding, cover or edition may vary.
This is a used book - there is no escaping the fact it has been read by someone else and it will show signs of wear and previous use. Overall we expect it to be in very good condition, but if you are not entirely satisfied please get in touch with us
Trustpilot