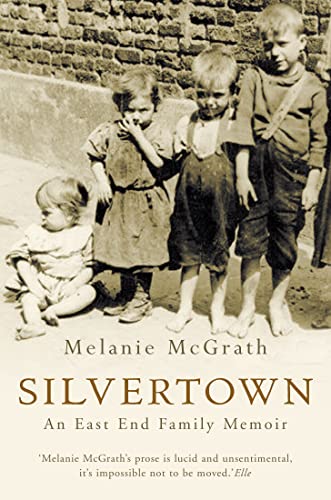 In this remarkable book, award-winning writer Melanie McGrath has given us a vivid and poignant memoir of the East End. McGrath spent years wondering about her East End roots. At the turn of the twenty-first century the places where her grandparents lived out their lives Poplar, East Ham and Silvertown - are virtually unrecognisable; her grandparents, Jenny and Len Page, long since dead and already half forgotten.

Silvertown teems with stories of life in the docks and pubs and dog tracks of the old East End where Melanie McGrath's grandparents scraped a living. Here are the bustling alleys and lanes of Poplar in 1914, where eleven year old Jenny watches the men go off to fight; the Moses sweatshop on the Mile End Waste; the London docks, then the largest port in the world; and Jenny having her teeth pulled out on her seventeenth birthday. Here too is the Cosy Cafe, opened full of hope by Jenny and Len - later a home to their troubled marriage - and an East End landscape which is altered forever by the closure of the docks and the disintegration of this close knit community.

The places Melanie McGrath describes have largely vanished now. This evocative and deeply moving family memoir recreates the lost East End and the struggles of those who live there.

'McGrath tells her story in a novelist's idiom, and the result is extraordinarily powerful and curiously resonant. Like much of the East End, Silvertown today is in the process of an astonishing transformation. The curse on the area has been lifted. But McGrath has beautifully recorded the old Silvertown just before it disappears for ever.' Sinclair McKay, Daily Telegraph

'This is a remarkable account of the social history of the East End. It provides a rare bridge between those two separate Londons; for while the story belongs to a mysterious past, the style and sophistication is strikingly contemporary.' Anthony Sampson, Guardian

Melanie McGrath is the author of three previous books, `Motel Nirvana', `Hard, Soft & Wet' and `Silvertown'. She is a regular contributor for the Guardian, Independent and the Express. She lives in Vauxhall, London.

GOR000386375
9781841151434
1841151432
Silvertown: An East End family memoir by Melanie McGrath
Melanie McGrath
Used - Very Good
Paperback
HarperCollins Publishers
2003-02-03
256
Short-listed for James Tait Black Memorial Prize (Biography) 2002
Book picture is for illustrative purposes only, actual binding, cover or edition may vary.
This is a used book - there is no escaping the fact it has been read by someone else and it will show signs of wear and previous use. Overall we expect it to be in very good condition, but if you are not entirely satisfied please get in touch with us
Trustpilot