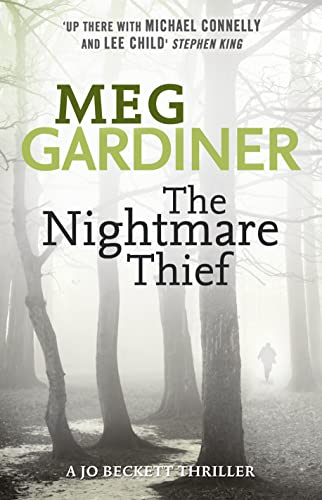 The Nightmare Thief by Meg Gardiner

In the California wilderness no one can hear you scream.

The Nightmare Thief by Meg Gardiner

In the California wilderness no one can hear you scream.

San Francisco Forensic Psychiatrist Jo Beckett doesn't dissect the body or the crime scene - she dissects a life and a mind, recreating the victim as a person, piecing together the story of their death to get to the truth. And then she goes after the killer.

Autumn Reiniger wants something special for her twenty-first birthday. Daddy's bought her the car and the apartment, but now she wants excitement. And what Autumn desires, she gets.

Her father signs-up her and five friends for an ultimate urban reality game. `Edge Adventures' alert the SF police that a `crime situation' is underway, so the authorities will ignore any squealing tires or desperate cries for help.

Then - when working on a case nearby - Jo Beckett encounters a group of men carting six sullen college kids to the woods for a wilderness adventure. Suspicious, she takes a closer look. And winds up with an invite to a birthday party she may never leave ...

`One of the most exciting openings of a crime book I have come across ... a tense, thrill-a-second race against time as everyone present is forced to confront real life-changing danger.' DAILY MAIL

Praise for THE MEMORY COLLECTOR:
`The next suspense superstar.' STEPHEN KING

Praise for THE LIAR'S LULLABY:
`Breathless suspense, slick plotting and a cast of compelling characters make this a solid addition to Edgar-winner Gardiner's dossier of superlative thrillers with appeal both for pure suspense fans and those who favour well-delineated characters.' BOOKLIST

Meg Gardiner is originally from Southern California, where she practiced law and taught at the University of California, Santa Barbara. She is the author of five Evan Delaney novels and the Jo Beckett thrillers, The Dirty Secrets Club, The Memory Collector and The Liar's Lullaby. She lives with her family near London.

GOR010843107
9780007337668
0007337663
The Nightmare Thief by Meg Gardiner
Meg Gardiner
Used - Well Read
Paperback
HarperCollins Publishers
2011-06-09
284
N/A
Book picture is for illustrative purposes only, actual binding, cover or edition may vary.
This is a used book. We do our best to provide good quality books for you to read, but there is no escaping the fact that it has been owned and read by someone else previously. Therefore it will show signs of wear and may be an ex library book
Trustpilot