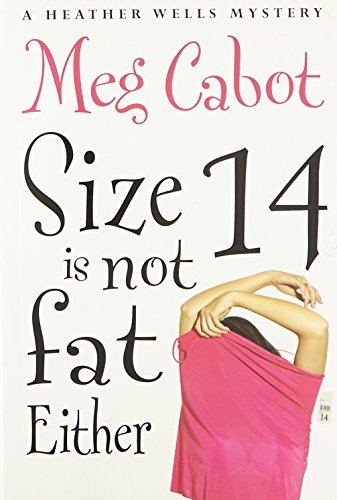 Size 14 is Not Fat Either by Meg Cabot

Size 14 is Not Fat Either by Meg Cabot

It's the first day of the winter semester at New York College, and assistant dorm director Heather Wells has a lot more to worry about than roommate conflicts. One of the New York College cheerleaders has lost her head - literally - in the Fischer Hall cafeteria, and no one can find the rest of her.

With the entire population of the dorm under suspicion for murder, it doesn't look like anyone on campus, least of all Heather, who is starting night classes, is going to have a good semester. She's got a decapitated cheerleader and a demoralized student body to deal with, as well as enough guy problems to make a normal girl seek shelter in a convent. With her ex insisting she has to be at his wedding - The Celebrity Wedding of the Decade, her incompetent new boss freaking out over his job demands, her long lost father looking to reunite (with an eye on Heather's far-from ample bank account), and the love of her life still no closer to realizing she's the girl of his dreams, it's no wonder Heather prefers questioning suspects to dealing with her personal life.

But when the murder trail leads her to the door of one of New York College's oldest and wealthiest fraternities, Heather finds that initiation rites have been taken to a whole new level . . .

In addition to her adult novels, Meg Cabot is the author of the internationally successful The Princess Diaries. Meg and her husband divide their time between New York City and Key West, Florida. Size 14 Is Not Fat Either ... is the second book of The Heather Wells Mysteries.
GOR000393183
9780330443944
0330443941
Size 14 is Not Fat Either by Meg Cabot
Meg Cabot
Used - Very Good
Paperback
Pan Macmillan
2007-01-01
352
N/A
Book picture is for illustrative purposes only, actual binding, cover or edition may vary.
This is a used book - there is no escaping the fact it has been read by someone else and it will show signs of wear and previous use. Overall we expect it to be in very good condition, but if you are not entirely satisfied please get in touch with us
Trustpilot