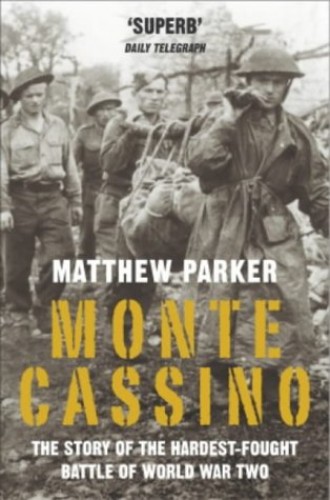 The compelling account of one of the most ferocious and costly battles of World War Two, including interviews with hundreds of veterans who have never spoken publicly before

The six-month battle for Monte Cassino was Britain's bitterest and bloodiest encounter with the German army on any front in World War Two.

At the beginning of 1944 Italy was the western Allies' only active front against Nazi-controlled Europe, and their only route to the capital was through the Liri valley. Towering over the entrance to the valley was the medieval monastery of Monte Cassino, a seemingly impenetrable fortress high up in the 'bleak and sinister' mountains. This was where the German commander, Kesselring, made his stand.

MONTE CASSINO tells the extraordinary story of ordinary soldiers tested to the limits under conditions reminiscent of the bloodbaths of World War One. In a battle that became increasingly political, symbolic and personal as it progressed, more and more men were asked to throw themselves at the virtually impregnable German defences. It is a story of incompetence, hubris and politics redeemed at dreadful cost by the heroism of the soldiers.

"[An] exemplary, heartbreaking book." -"The Washington Post" "Monte Cassino [was] perhaps the most interesting campaign of all. . . . [A] moving and well-researched book." --"The Economist" "Few people today realize that British and American soldiers fought in a battle that compares to Stalingrad for human suffering." Monte Cassino" is a fitting tribute: an important and beautifully written book, told with real understanding and pathos." -"Daily Telegraph" "One of the true epics of infantry war in World War II.... A gripping story of incompetence, courage, cowardice and almost every other human emotion that war can excite." -"Irish Independent" "Deeply felt. . . . A fine book on a heartbreaking tragedy." -"Irish Times" "An excellent account of the hardest fighting carried out by the Western allies." -"The Independent on Sunday" "Good accounts have been written of the battle before, but none has managed to convey the sheer awfulness of fighting with quite the same success. . . . Parker has produced a deeply moving, richly detailed, and fast-paced account of the most infamous British battle of the Second World War." -"Sunday Telegraph" "A careful reconstruction of the Allied campaign. . . . An accomplished study." -"Kirkus Reviews" "Parker captures the heroism, horror, and sheer brutality of a battle that rivals Stalingrad for savagery. . . . An outstanding chronicle illustrating both valor and futility." -"Booklist" "Parker captures the horrific nature of the combat. . . . An oustanding example of military history, Parkers' study is of the same caliber as John Ellis's masterpiece, Cassion: The Hollow Victory, and should be in every World War IIcollection." -"Library Journal"
Matthew Parker gained a first-class degree in English at Oxford University and now works as a writer, editor and book reviewer who specialises in modern history.
GOR001227016
9780755311767
0755311760
Monte Cassino by Matthew Parker
Matthew Parker
Used - Very Good
Paperback
Headline Publishing Group
2004-08-02
480
N/A
Book picture is for illustrative purposes only, actual binding, cover or edition may vary.
This is a used book - there is no escaping the fact it has been read by someone else and it will show signs of wear and previous use. Overall we expect it to be in very good condition, but if you are not entirely satisfied please get in touch with us
Trustpilot