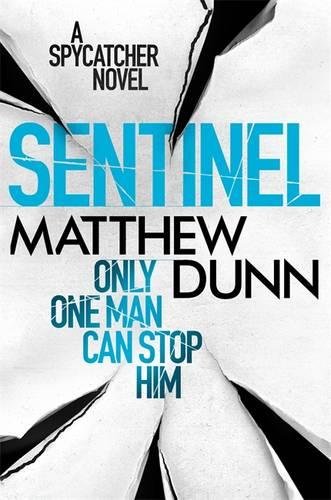 The United States and Russia are on the brink of war and only Will Cochrane - the master spy introduced in the critically acclaimed SPYCATCHER - can find and unmask the diabolical double-agent responsible for it all.

Fourteen days ago, CIA headquarters in Langley, Virginia, received a cryptic message from an agent operating deep undercover in Russia: 'He has betrayed us and wants to go to war.' Unable to make contact, the Director of Operations is forced to turn to one of his most deadly field officers - Will Cochrane. His mission is simple: infiltrate the remote submarine base in eastern Russia's Avacha Bay, locate the MI6 agent operating under the codename 'Svelte', and decode his message - or die trying.

It's a near impossible task, even for a man who carries the codename Spartan, a title given to only the most effective and deadliest Western intelligence officers. Will successfully locates the base, but finds Svelte near death, his last words a final clue: 'Only Sentinel can stop him.'

Meanwhile, political and economic tensions between the U.S. and Russia are rising by the day, with both sides rounding up known enemy sleeper agents within their borders for interrogation. Now it's up to Will - with the help of the top-secret joint CIA-MI6 Spartan Section - to uncover the true meaning of Svelte's message and discover the identity of the legendary operative known only as 'Sentinel'.

Great talent, great imagination, and real been-there, done-that authenticity. . . Highly recommended -- Lee Child on Spy Catcher
As in Spycatcher, Dunn's action scenes are vividly drawn. Lovers of derring-do will love this series * BOOKLIST *
Dunn delivers insights into a world most of us will never experience - except between the covers of a book, or maybe someday in a movie as good as the best of the Bond and Bourne sagas * OAKLAND TRIBUNE *
Fast-paced and furious, this is a rough-and-tumble ride across some of the most forbidding territory - city and country - in Russia . . . with no let-up in the action or the ferocious pace of the chase * SHOTS MAGAZINE *
Dunn, a former M16 officer, fashions a Nietzschean hero who looks poised to give Lee Child's Jack Reacher a run for his readers . . . This is a twisty, cleverly crafted work * KIRKUS REVIEWS on Spycatcher *
Matthew Dunn is a very talented new author. I know of no other spy thriller that so successfully blends the fascinating nuances of the business of espionage and intelligence work with full-throttle suspense storytelling -- Jeffery Deaver on Spycatcher
Terse conversations infused with subtle power plays, brutal encounters among allies with competing agendas, and forays into hostile territory orchestrated for clockwork efficiency but vulnerable to deadly missteps. . . . A stylish and assured debut * WASHINGTON POST on Spycatcher *
Like le Carre and Fleming before him, Dunn is the real thing, a former member of SIS turned fictional chronicler of the secret world. . . . Meet Will Cochrane, a one-man weapon of mass destruction; 007 is a cocktail-sipping lush compared with Cochrane * DAILY TELEGRAPH on Spycatcher *
A real spy proves he is a real writer-and a truly deft and inventive one. This is a stunning debut -- Ted Bell on Spycatcher
Matthew Dunn was trained by SIS in all aspects of intelligence collection and direct action including agent running, deep-cover deployments, small-arms, explosives, military unarmed combat, surveillance, anti-surveillance, counter-surveillance, advanced driving, infiltration and exfiltration techniques and covert communications. He used his skills extensively on operations. Although typically he worked alone, but in conducting near seventy missions, he also had significant experience of working with highly-specialised units from the SAS and SBS as well as conducting joint-operations with MI5, GCHQ and the CIA. Medals are never awarded to modern MI6 officers, but Dunn was the recipient of a very rare personal commendation from the Foreign Secretary actions that directly influenced the successful conclusion of a major international incident. He lives in England.
GOR012205185
9781409143970
140914397X
Sentinel: A Spycatcher Novel by Matthew Dunn
Matthew Dunn
Used - Like New
Hardback
Orion Publishing Co
2013-01-03
320
N/A
Book picture is for illustrative purposes only, actual binding, cover or edition may vary.
The book has been read, but looks new. The book cover has no visible wear, and the dust jacket is included if applicable. No missing or damaged pages, no tears, possible very minimal creasing, no underlining or highlighting of text, and no writing in the margins
Trustpilot