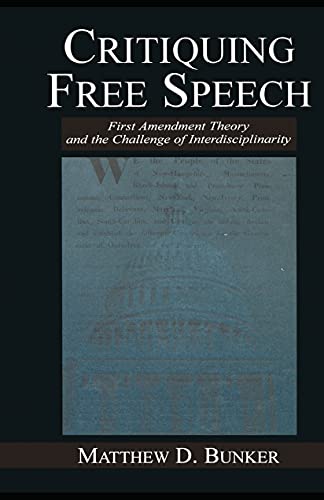 In this exceptional volume, Matthew D. Bunker explores the work of contemporary free speech critics and argues that, while at times these critics provide important lessons, many of their conclusions must be rejected. Moreover, Bunker suggests that we be wary of interdisciplinary approaches to free speech theory that--by their very assumptions and techniques--are a poor "fit" with existing free speech theory and doctrine. In his investigation of diverse critiques of free speech theory and his sophisticated rebuttal, he provides an innovative and important examination of First Amendment theory. In doing so, he establishes a new agenda for First Amendment theory scholarship that incorporates some of the critics' insights without abandoning the best aspects of the free speech tradition.


COPY FOR MAILER:
Distinctive features in this volume include:
* an overview of the traditional approaches to First Amendment theory,
* an examination of work from key First Amendment scholars and theorists, at both the individual and group level,
* an emphasis on interdisciplinarity ranging from femi- nist and critical legal scholars to economists and literary theorists, and
* a new agenda for First Amendment theory scholar- ship which incorporates critical comment while pre- serving the best aspects of the free speech tradition.

"Any thumbnail sketch risks oversimplification, but this masterful mapping of the terrain of modern thought about free expression provides a sure-footed guide to undergraduates and others exploring contemporary intellectual disputes in disparate fields touching on First-Amendment issues."
-CHOICE

"In the end, the editor reiterates the value of interdisciplinary thought, and suggests various ways in which First Amendment theory can go. Bunker proposes top-down reasoning, which takes a deductive approach to matters, as well as bottom-up reasoning, based on inductionism. He ultimately lands on wide reflective equilibrium, which is the convergence of both types of reasoning and takes both descriptive and normative constitutional elements into account."
-International Journal of Public Opinion Research

"Critiquing Free Speech distinguishes Matt Bunker as a First Amendment scholar with few peers. This is an exceptionally thoughtful and stimulating book, a sophisticated but accessible critique of critiques of what in the United States free speech means. It brings depth and breadth to First Amendment theory in ways that invite us all to question unquestioned assumptions about what in principle and in practice we expect from the First Amendment."
-Theodore L. Glasser
Stanford University

"This book solidifies Matthew Bunker's position as a leading young First Amendment scholar. Bunker not only presents a thorough analysis of modern thinking about freedom of expression, he also synthesizes current approaches and suggests an innovative interdisciplinary path for free speech theorists to follow. His book will be a standard reference for years to come."
-Robert Trager
University of Colorado

"Theoretically penetrating, elegant in language, and clear in argumentation is Matthew Bunker's Critiquing Free Speech. At the same time, it is modest in its claims and invariably respectful of the ideas of others. And the 'others,' and more, are here: Milton, Kant, Mill, Rawls, Dworkin, Kuhn, Rorty, MacIntyre, Sandel, Tribe, Posner, and Sunstein. Bunker cautions interdisciplinary theorists...not to overlook irreducible values in earlier free speech models; for example, the high costs of hate speech and some forms of pornography should not be used to collapse the entire free speech edifice. This is the best explication of legal theory and its moral implications and antecedents in the field and a must for anyone caring to go beyond the technical legal rudiments of media law."
-Donald M. Gillmor
Silha Professor of Media Ethics and Law, Emeritus, University of Minnesota

"What Emerson did for the doctrine of First Amendment case law in the seminal System of Freedom of Expression, Bunker does for the theory. His summary and analysis of the other important theorists are exquisite. His interdisciplinary approach is fresh and rich with possibilities. Not many others could have written this book, and only Bunker could do it this well."
-Steven Helle
University of Illinois at Urbana-Champaign