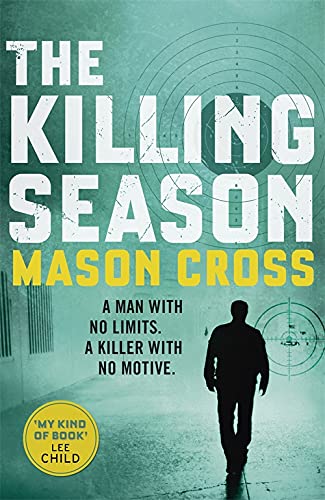 The Killing Season by Mason Cross

For fans of Lee Child and James Patterson, THE KILLING SEASON is a fast-paced American thriller with a central character who could give Jack Reacher, Alex Cross and Jason Bourne a run for their money.

The first thing you should know about me is that my name is not Carter Blake. That name no more belongs to me than the hotel room I was occupying when the call came in.

When Caleb Wardell, the infamous 'Chicago Sniper', escapes from death row two weeks before his execution, the FBI calls on the services of Carter Blake, a man with certain specialised talents whose skills lie in finding those who don't want to be found. A man to whom Wardell is no stranger.

Along with Elaine Banner, an ambitious special agent juggling life as a single mother with her increasingly high-flying career, Blake must track Wardell down as he cuts a swathe across America, apparently killing at random.

But Blake and Banner soon find themselves sidelined from the case. And as they try desperately to second guess a man who kills purely for the thrill of it, they uncover a hornets' nest of lies and corruption. Now Blake must break the rules and go head to head with the FBI if he is to stop Wardell and expose a deadly conspiracy that will rock the country.

Slick, fast-paced and assured, THE KILLING SEASON is the first novel in the gripping new Carter Blake series.

My kind of book -- Lee Child
"One of the most interesting 'loner' heroes to have arrived in recent years...Told with pace and vigour by a writer who seems to have a natural aptitude for thrillers, it is not to be missed." * DAILY MAIL *
An American setting, universal themes, top-class writing, Scottish author - it's a recipe that makes a deadly impact in this impressively sharp debut. Action fans rejoice, there's a new names on the Scottish thriller squad. He plays fast, he plays dirty and, with this calibre of high-octane action, he'll definitely be taking prisoners * DAILY RECORD *
Pulse-pounding. Mason Cross launches into The Killing Season with no-holds barred, as he deftly combines an adrenaline rush plot with one of the best new series characters since Jack Reacher. Prepare to read all night -- Lisa Gardner
Mason Cross has created an enigmatic character in Carter Blake . . . The writing is taut, intelligent, oozes suspense . . . a highly impressive debut novel -- Matt Hilton, author of the Joe Hunter thrillers
An impressively exciting debut, written with panache and a good ear for grim humour * MORNING STAR *
The pace's relentless, the suspense nail-biting, and the pages fly by . . . the pulse-pounding thriller debut of 2014 * PETERBOROUGH EVENING TELEGRAPH *
This really is a superb, read-in-one-go novel -- Mark Timlin * BUZZ *
The writing is assured and entertaining. The plotting is slick and pacey . . . in his debut novel, Mason Cross has really hit the ground running, there's no doubt about that. THE KILLING SEASON delivers time and again with smart big-screen thrills * CRIME THRILLER FELLA *
A great mix of intrigue, strong characters and a thrilling plot which reels you in from the first page. This debut has the feel of an author who is destined to become well practiced in producing best-selling thrillers. * CRIMESQUAD *
A breathless race against time ensues with all the gilt-edge thrills and more. Relentless and no holds barred, a guilty pleasure of a read. -- Maxim Jakubowski * LOVE READING *
I cannot sing this novel's praises highly enough - it's a joy to read, utterly engaging and kept me hooked right from the first page to the last. There's high stakes and high tension, and the chemistry between Blake and Banner sizzles off the page. If you love action thrillers, if you love crime fiction, go and read this book. I'm sure you won't regret it. * CRIME THRILLER GIRL *
A very fine debut penned with the smooth style and skill of a much more experienced writer, this adds a new name to the gamut of special operatives and high-tension characters and plots so loved by thriller readers. I know it's been said already, but I'll say it again: this is one to watch out for. * SHOTS *

Mason Cross was born in Glasgow in 1979. He studied English at the University of Stirling and currently works in the voluntary sector. He has written a number of short stories, including 'A Living', which was shortlisted for the Quick Reads 'Get Britain Reading' Award. He lives in Glasgow with his wife and three children.

GOR010473908
9781409145691
1409145697
The Killing Season: Carter Blake Book 1 by Mason Cross
Mason Cross
Carter Blake Series
Used - Like New
Paperback
Orion Publishing Co
2015-04-09
400
N/A
Book picture is for illustrative purposes only, actual binding, cover or edition may vary.
The book has been read, but looks new. The book cover has no visible wear, and the dust jacket is included if applicable. No missing or damaged pages, no tears, possible very minimal creasing, no underlining or highlighting of text, and no writing in the margins
Trustpilot