Now You See Him, Now You Don't Mary-Kate Olsen 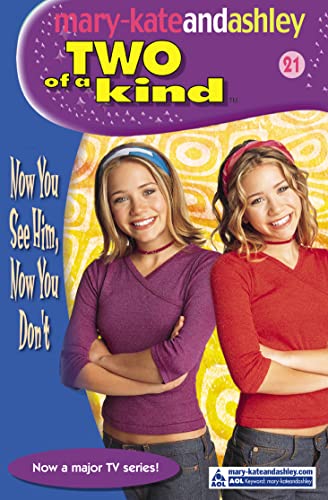 Now You See Him, Now You Don't by Mary-Kate Olsen

Mary-Kate and Ashley have great tricks ready for the Harrington Magic Show. They're sure to be a hit! But before show time, Ashley's partner leaves her trapped in a box and Mary-Kate's mind-reading horse disappears. The girls are going to need some real magic to get out of this one!

By Megan Stine.
From the series created by Robert Griffard and Howard Adler.

At just 15 they are a showbiz phenomenon and so squeaky clean they make Britney Spears look like a rebel.
The Sun (January 31, 2002)

Mary-Kate and Ashley Olsen must be the coolest twins around.
tv choice (December 15-21, Issue 51)

The most powerful teenagers on earth.
Andrew Buncombe, The Independent (January 2002)

GOR001828990
9780007144464
0007144466
Now You See Him, Now You Don't (Two Of A Kind, Book 21) by Mary-Kate Olsen
Mary-Kate Olsen
Two Of A Kind
Used - Very Good
Paperback
HarperCollins Publishers
20030707
112
N/A
Book picture is for illustrative purposes only, actual binding, cover or edition may vary.
This is a used book - there is no escaping the fact it has been read by someone else and it will show signs of wear and previous use. Overall we expect it to be in very good condition, but if you are not entirely satisfied please get in touch with us
Trustpilot