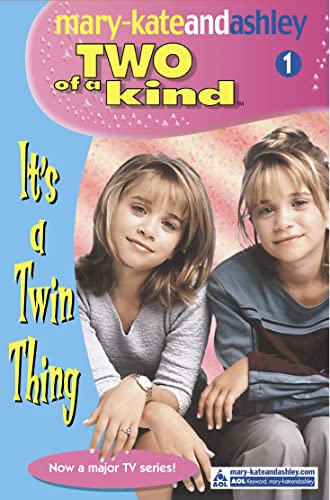 It's A Twin Thing by Mary-Kate Olsen

It's A Twin Thing (Two Of A Kind, Book 1) by Mary-Kate Olsen

Ashley can't wait to go back to school. The new school year means shopping for new clothes, meeting new boys... shopping for MORE new clothes! Her twin sister, Mary-Kate, thinks she's crazy. Mary-Kate would much rather hit a softball than a mega-mall. But they do agree on one thing:
THEY'RE WAY TOO OLD FOR A BABYSITTER!

Too bad their dad doesn't see it that way. Now the twins need a plan - a plan to show Dad just how right they are!

"The twins are the epitome of middle-class southern California: pretty, polite and inspirational. The image appeals to a vast number of young girls."
John Harlow, The Sunday Times (January 27, 2002)

"At just 15 they are a showbiz phenomenon and so squeaky clean they make Britney Spears look like a rebel."
The Sun (January 31, 2002)

"Mary-Kate and Ashley Olsen must be the coolest twins around."
tv choice (December 15-21, Issue 51)

"The most powerful teenagers on earth."
Andrew Buncombe, The Independent (January 2002)

GOR000269305
9780007144808
0007144806
It's A Twin Thing (Two Of A Kind, Book 1) by Mary-Kate Olsen
Mary-Kate Olsen
Two Of A Kind
Used - Very Good
Paperback
HarperCollins Publishers
2002-03-18
112
N/A
Book picture is for illustrative purposes only, actual binding, cover or edition may vary.
This is a used book - there is no escaping the fact it has been read by someone else and it will show signs of wear and previous use. Overall we expect it to be in very good condition, but if you are not entirely satisfied please get in touch with us
Trustpilot