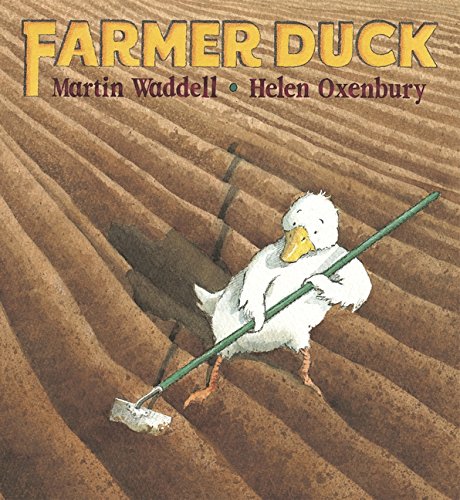 A hardworking duck is rescued from life with a lazy farmer in this award-winning picture book classic from Owl Babies author, Martin Waddell, and Bear Hunt illustrator, Helen Oxenbury.

A hardworking duck is rescued from life with a lazy farmer in this award-winning picture book classic from Owl Babies author, Martin Waddell, and Bear Hunt illustrator, Helen Oxenbury.

In this Kate Greenaway Medal and Kurt Maschler Award-winning modern classic, two of the most celebrated picture book creators of our time tell the story of a hardworking duck, who has the very bad luck of living with a lazy farmer. The duck cooks and cleans, tends the fields and cares for the other animals on the farm - and all while the famer lies in bed! That is until the day the animals decide to take action ... and come to the rescue with a simple, but heroic plan.

This book will be bought for years. * The Independent on Sunday *
Marvellously expressive pictures and a satisfying text make this the outstanding picture book of the year. * The Sunday Times *
Helen Oxenbury's illustrations speak volumes... They're a perfect match for Martin Waddell's equally excellent text. * Books for Keeps *

Born in Belfast, Martin Waddell was an aspiring football player for many years, before turning his hand to writing. He is now widely regarded as one of the greatest living children's writers, and has over 220 published titles to his name. He is perhaps best known for Owl Babies, illustrated by Patrick Benson and Farmer Duck, illustrated by Helen Oxenbury; as well as the 1989 Kurt Maschler Award-winning The Park in the Dark and the Little Bear series, both illustrated by Barbara Firth. In 2004, Martin received the Hans Christian Andersen Medal for his lasting contribution to children's literature, the highest career recognition available to a writer or illustrator of children's books. He lives in Newcastle, County Durham.

Helen Oxenbury is among the most popular and critically acclaimed illustrators of her time. Her numerous books for children include Farmer Duck by Martin Waddell, We're Going on a Bear Hunt by Michael Rosen, as well as her classic board books for babies. She won the Kate Greenaway Medal for Alice's Adventures in Wonderland. Her most recent picture books include the critically acclaimed There's Going to Be a Baby, the first book-publishing collaboration between her and her husband John Burningham, and Charley's First Night and When Charley Met Granpa by Amy Hest. Helen lives in London.

GOR000651443
9780744536607
074453660X
Farmer Duck by Martin Waddell
Martin Waddell
Used - Very Good
Paperback
Walker Books Ltd
1995-09-04
40
Winner of British Book Awards Illustrated Children's Book of the Year 1991 Winner of Smarties Book Prize Overall Winner 1991 Winner of Smarties Book Prize 0-5 Category 1991
Book picture is for illustrative purposes only, actual binding, cover or edition may vary.
This is a used book - there is no escaping the fact it has been read by someone else and it will show signs of wear and previous use. Overall we expect it to be in very good condition, but if you are not entirely satisfied please get in touch with us
Trustpilot