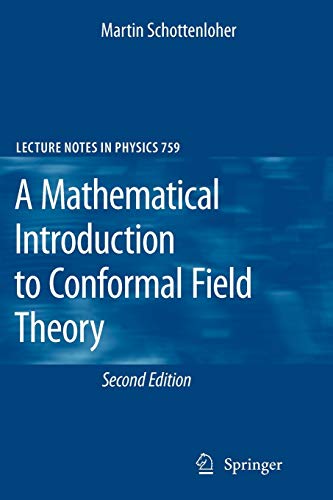 A Mathematical Introduction to Conformal Field Theory by Martin Schottenloher

The first part of this book gives a self-contained and mathematically rigorous exposition of classical conformal symmetry in n dimensions and its quantization in two dimensions. The second part surveys some more advanced topics of conformal field theory.

A Mathematical Introduction to Conformal Field Theory by Martin Schottenloher

The second edition of these notes has been completely rewritten and substantially expanded with the intention not only to improve the use of the book as an int- ductory text to conformal ?eld theory, but also to get in contact with some recent developments. In this way we take a number of remarks and contributions by re- ers of the ?rst edition into consideration who appreciated the rather detailed and self-contained exposition in the ?rst part of the notes but asked for more details for the second part. The enlarged edition also re?ects experiences made in seminars on the subject. The interest in conformal ?eld theory has grown during the last 10 years and several texts and monographs re?ecting different aspects of the ?eld have been p- lished as, e. g. , the detailed physics-oriented introduction of Di Francesco, Mathieu, 1 and Sen ' echal ' [DMS96*], the treatment of conformal ?eld theories as vertex - gebras by Kac [Kac98*], the development of conformal ?eld theory in the context of algebraic geometry as in Frenkel and Ben-Zvi [BF01*] and more general by Beilinson and Drinfeld [BD04*]. There is also the comprehensive collection of ar- clesbyDeligne,Freed,Witten,andothersin[Del99*]aimingtogiveanintroduction to strings and quantum ?eld theory for mathematicians where conformal ?eld theory is one of the main parts of the text. The present expanded notes complement these publications by giving an elementary and comparatively short mathematics-oriented introduction focusing on some main principles.

From the reviews of the second edition:

"The book under review is the second ... edition of the original text, thereby reflecting various recent developments in the field during the past ten years, on the one hand, and making especially the physics part of the notes more detailed, self-contained and tutorial on the other. ... this highly appreciated mediator between contemporary mathematics and physical quantum field theory has grown into an even more valuable source for students, teachers, and active researchers in this fascinating area of modern science." (Werner Kleinert, Zentralblatt MATH, Vol. 1161, 2009)

"The second edition of this classical introduction to conformal field theory for a mathematically oriented audience has been substantially revised and expanded ... . many new examples and statements have been included throughout the whole text. ... Completeness, the extremely clear exposition and well-chosen references at the end of each chapter make this introduction an unmissable reference for the mathematician aiming to learn the basics of conformal field theory." (Domenico Fiorenza, Mathematical Reviews, Issue 2011 a)