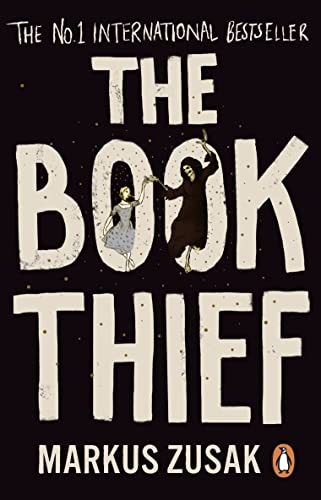 The Book Thief by Markus Zusak

'Life affirming, triumphant and tragic . This is her story and the story of the inhabitants of her street when the bombs begin to fall.

SOME IMPORTANT INFORMATION - THIS NOVEL IS NARRATED BY DEATH
___

What readers are saying about The Book Thief:

The Book Thief: The life-affirming number one international bestseller by Markus Zusak

1939. Nazi Germany. The country is holding its breath. Death has never been busier.
Liesel, a nine-year-old girl, is living with a foster family on Himmel Street. Her parents have been taken away to a concentration camp. Liesel steals books. This is her story and the story of the inhabitants of her street when the bombs begin to fall.

SOME IMPORTANT INFORMATION - THIS NOVEL IS NARRATED BY DEATH
___

What readers are saying about The Book Thief:

***** 'I loved every page of this book. So many great quotes, observations on humanity and images...I just didn't want it to end.
***** 'I loved this book. It is not only one of the best I've read this year, it is one of the best I've ever read.'
***** 'This is the sort of book the restores your faith in humanity and leaves you feeling uplifted, even when it makes you shed a tear.

Extraordinary, resonant and relevant, beautiful and angry. -- Lisa Hilton * Sunday Telegraph *
...a beautifully balanced piece of storytelling...Unsettling, thought-provoking, life affirming, triumphant and tragic, this is a novel of breathtaking scope, masterfully told. It is an important piece of work, but also a wonderful page-turner. * Guardian *
A moving work which will make many eyes brim. -- Marianne Brace * Independent on Sunday *
This is a weighty novel worthy of universal acclaim. A sense of dread prevades this beautifully written novel. As The Book Thief draws to a close, Death says: "There's a multitude of stories that i allow to distract me as I work." The story of the Book Thief, who tried to change the world in her own small way, proves one formidable and inspiring distraction. -- Lianne Kolirin * The Daily Express *
Brilliant and hugely ambitious ... the kind of book that could be life-changing * New York Times Book Review *
...breathtakingly good. -- Becky Stradwick, Buyer, Borders * The Bookseller *
A magical tale. * Elle *
...a fantastic book...it packs a huge emotional punch. -- Angela Lockton, The Golden Treasury, London * The Bookseller *
A tonic much needed amid the ominous menace of an era of such calamity. -- Alexandra Hamlyn * FT magazine *
Quirky, engaging and beautifully written * Woman and Home *
His faith in the transformative power of storytelling bestows this gentle but worthwhile novel with its own narrative strength and power. -- Claire Allfree * Metro *
Absorbing and searing * Washington Post *
A major achievement * People *
Deserves a place on the shelf with The Diary of Anne Frank - set to become a classic * USA Today *
Zusak makes his ostensibly gloomy subject bearable in the same way Kurt Vonnegut did in Slaughterhouse 5, with grim, darkly consoling humour * Time *
Zusak's playfulness with language leavens the horror and makes the theme more resonant - words can save your life ...It's a measure of how sucessfully Zusak has humanized these characters that even though we know they are doomed, it's no less devastating when Death finally reaches them * Publishers Weekly *
One of the most highly anticipated young-adult books in years * The Wall Street Journal *
'Elegant, philosophical and moving. A work to read slowly and savour. Beautiful and important * Kirkus Reviews *
Both gripping and touching, a work that kept me up late into the night feverishly reading the last 300 pages * Cleveland Plain-Dealer *
Zusak's novel is a highwire act of inventiveness and emotional suppleness * The Australian *

MARKUS ZUSAK is the bestselling author of six novels, including THE BOOK THIEF. His books have been translated into more than forty languages, to both popular and critical acclaim. He lives in Sydney with his wife and two children.
Find Markus on his blog www.zusakbooks.com
Facebook /markuszusak
Instagram @markuszusak

GOR008300587
9781784162122
1784162124
The Book Thief: The life-affirming number one international bestseller by Markus Zusak
Markus Zusak
Used - Good
Paperback
Transworld Publishers Ltd
2016-09-15
560
N/A
Book picture is for illustrative purposes only, actual binding, cover or edition may vary.
This is a used book - there is no escaping the fact it has been read by someone else and it will show signs of wear and previous use. Overall we expect it to be in very good condition, but if you are not entirely satisfied please get in touch with us
Trustpilot