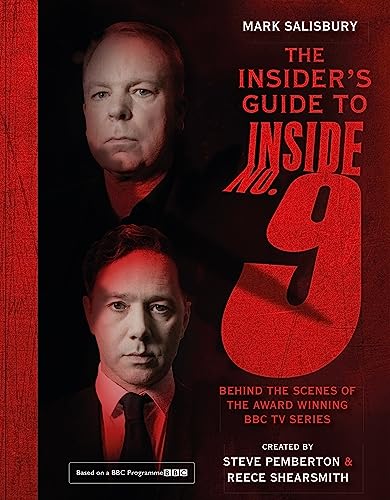 The Insider's Guide to Inside No. 9 by Mark Salisbury

The complete show-by-show guide to award-winning series Inside No. 9

The Insider's Guide to Inside No. 9: Behind the Scenes of the Award Winning BBC TV Series by Mark Salisbury

The ultimate companion to unlock what lurks Inside No. 9

Welcome, reader, to the experience of a lifetime: a behind-the-scenes tour of the remarkable Bafta award-winning series. This show-by-show guide reveals the genesis of each episode's idea through to the scripting, casting, design, direction, and production - where you'll have access to the minds and imaginations of creators Reece Shearsmith and Steve Pemberton.

Filled with the show's dark humour and behind-the-scenes photographs, production stills, mood boards and concept drawings, you'll find yourself delighted and disturbed in equal measure. Every episode from the first five series will be covered by interviews with key creatives and discussion of the inspiration and creation behind every moment.

Are you ready to step through the door marked No. 9?

Mark Salisbury is the New York Times best-selling author of The Case of Beasts: Explore the Film Wizardry of Fantastic Beasts and Where to Find Them. A former editor of Britain's Empire magazine, he has written more than 15 books, including Burton On Burton, Moviemaking Magic of Star Wars: Creatures & Aliens, Crimson Peak: The Art Of Darkness, Prometheus: The Art Of The Film and Alice In Wonderland: A Visual Companion. He is currently writing the official book on the making of the 25th James Bond film, No Time To Die. Steve Pemberton is the award-winning actor, writer and co-creator of Inside No. 9, The League of Gentlemen and Psychoville. As an actor, Pemberton's recent credits include Killing Eve, Britannia, Good Omens, The Interrogation of Tony Martin and Happy Valley. He also adapted and starred in Mapp and Lucia, the widely acclaimed BBC mini-series, from the novels of E F Benson. Other writing credits include Les Dawson's Parisienne Adventure for Sky, and episodes of Whitechapel and Benidorm for ITV. Reece Shearsmith is the award-winning actor, writer and co-creator of The League of Gentlemen. He has also starred in numerous other TV comedies, including Car Share alongside Peter Kay, Mid Morning Matters with Steve Coogan, Catterick with Reeves and Mortimer and Spaced with Simon Pegg. As well as writing Inside No. 9, Reece also starred in Psychoville, which he co-wrote with Pemberton and ran for two series and a Halloween Special.
NGR9781529351262
9781529351262
152935126X
The Insider's Guide to Inside No. 9: Behind the Scenes of the Award Winning BBC TV Series by Mark Salisbury
Mark Salisbury
New
Hardback
Hodder & Stoughton General Division
2021-10-28
256
N/A
Book picture is for illustrative purposes only, actual binding, cover or edition may vary.
This is a new book - be the first to read this copy. With untouched pages and a perfect binding, your brand new copy is ready to be opened for the first time
Trustpilot