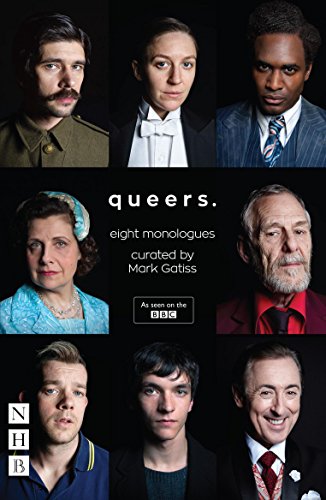 A young soldier returning from the trenches of the First World War recollects a love that dares not speak its name. Almost one hundred years later, a groom-to-be prepares for his gay wedding.Queers celebrates a century of evolving social attitudes and political milestones in British gay history, as seen through the eyes of eight individuals.Poignant and personal, funny, tragic and riotous, these eight monologues for male and female performers cover major events such as the Wolfenden Report of 1957, the HIV/AIDS crisis, and the debate over the age of consent through deeply affecting and personal rites-of-passage stories.Curated by Mark Gatiss, the monologues were commissioned to mark the anniversary of the 1967 Sexual Offences Act, which decriminalised homosexual acts in private between two men over the age of twenty-one. They will be broadcast on BBC Four in 2017, directed and produced by Gatiss, and starring Alan Cumming, Rebecca Front, Ian Gelder, Kadiff Kirwan, Russell Tovey, Gemma Whelan, Ben Whishaw and Fionn Whitehead. They will also be staged at The Old Vic in London. This volume includes: The Man on the Platform by Mark Gatiss, The Perfect Gentleman by Jackie Clune, Safest Spot in Town by Keith Jarrett, Missing Alice by Jon Bradfield, I Miss the War by Matthew Baldwin, More Anger by Brian Fillis, A Grand Day Out by Michael Dennis.
"An unbeatable series of monologues -- funny, filthy, mournful, celebratory, predatory, bathetic, heroic -- of the travails and, yes, fun had in the days before this particular love could speak its name." --Guardian--Guardian
"Sits triumphantly in the tradition of Alan Bennett's Talking Heads funny, poignant and closely observed" --The Times--The Times
GOR009543114
9781848426962
1848426968
Queers: Eight Monologues by Mark Gatiss
Mark Gatiss
Used - Very Good
Paperback
Nick Hern Books
1900-01-01
96
N/A
Book picture is for illustrative purposes only, actual binding, cover or edition may vary.
This is a used book - there is no escaping the fact it has been read by someone else and it will show signs of wear and previous use. Overall we expect it to be in very good condition, but if you are not entirely satisfied please get in touch with us
Trustpilot