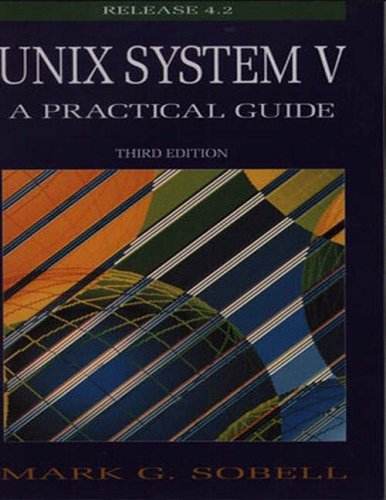 Reflecting the changes made in UNIX System V Release 4.2, the Third Edition of this bestseller is the most up-to-date and comprehensive reference available. For novice and experienced user alike, it provides a thorough introduction to UNIX, covering the operating system, utilities, shell programming, the vi editor, job control, system administration, and much more. New chapters include: Graphical User Interface (GUI), Networking, EMACS, and the KornShell. New appendices cover the POSIX standards and the version-specific features of AIX, HPUX, and SCO UNIX. More than 70 of the most frequently used UNIX utilities-including awk, make, SCCS, sed, and sort-are described in detail.

Mark G. Sobell is president of Sobell Associates Inc., a consulting firm that specializes in UNIX/Linux training, support, and custom software development. He is the author of many best-selling UNIX and Linux books and has more than twenty-five years of experience working with UNIX and Linux.

Appendixes for UNIX System V and Hands-on UNIX.
A. Regular Expressions.B. AIX.C. HPUX.D. SCO.E. The POSIX Standards. 080537566XT04062001
GOR001972942
9780805375664
080537566X
UNIX System V: A Practical Guide by Mark G. Sobell
Mark G. Sobell
Used - Very Good
Paperback
Pearson Education (US)
19941124
864
N/A
Book picture is for illustrative purposes only, actual binding, cover or edition may vary.
This is a used book - there is no escaping the fact it has been read by someone else and it will show signs of wear and previous use. Overall we expect it to be in very good condition, but if you are not entirely satisfied please get in touch with us
Trustpilot