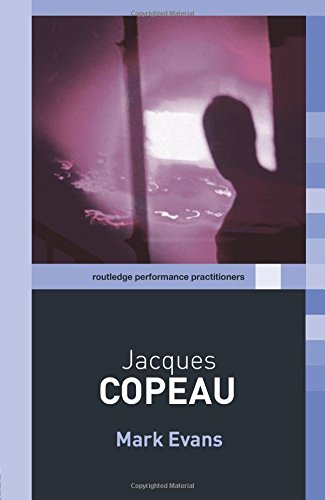 Jacques Copeau was a leading figure in the development of twentieth century theatre practice and a pioneer for work on actor-training. Examining one of the major influences on twentieth- and twenty-first-century performance, this book explores Jacques Copeau in an overview of his work and an analysis of his key ideas and performances.

Part of our successful Routledge Performance Practitioners series of introductory guides to the key theatre-makers of the last century, this book examines Jacques Copeau; a leading figure in the development of twentieth century theatre practice, a pioneer for work on actor-training, physical theatre and ensemble acting, and a key innovator in the movement to de-centralize theatre and culture to the regions.

Presenting the background to and the work of one of the major influences on twentieth- and twenty-first-century performance, this is the first book to combine:

As a first step towards critical understanding, and as an initial exploration before going on to further, primary research, Jacques Copeau is unbeatable value for today's student.

Coventry University, UK
List of Figures. Acknowledgements 1. The Life of Jacques Copeau 2. Copeau's Key Writings and Ideas 3. Copeau's Ideas in Production: Les Foubieres de Scapin 4. Acrobats of the Soul: Practical Exercises for the Actor 5. Copeau's Legacy. Bibliography. Index
GOR007521053
9780415354356
0415354358
Jacques Copeau by Mark Evans (Coventry University, UK)
Mark Evans (Coventry University, UK)
Routledge Performance Practitioners
Used - Very Good
Paperback
Taylor & Francis Ltd
20060728
192
N/A
Book picture is for illustrative purposes only, actual binding, cover or edition may vary.
This is a used book - there is no escaping the fact it has been read by someone else and it will show signs of wear and previous use. Overall we expect it to be in very good condition, but if you are not entirely satisfied please get in touch with us
Trustpilot