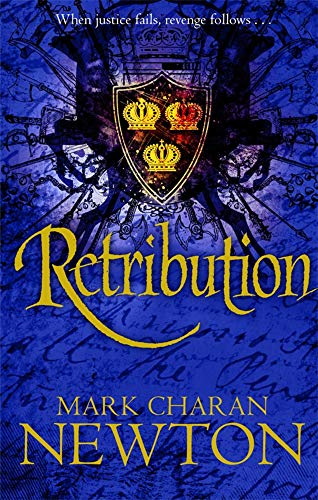 Having just solved a difficult case in his home city of Tryum, Sun Chamber Officer Lucan Drakenfeld and his associate Leana are ordered to journey to the exotic city of Kuvash in Koton, where a revered priest has gone missing. When they arrive, they discover the priest has already been found - or at least parts of him have.

But investigating the unusual death isn't a priority for the legislature of Kuvash; there's a kingdom to run, a census to create and a dictatorial Queen to placate. Soon Drakenfeld finds that he is suddenly in charge of an investigation in a strange city, whose customs and politics are as complex as they are dangerous.

Kuvash is a city of contradictions; wealth and poverty exist uneasily side-by-side and behind the rich facades of gilded streets and buildings, all levels of depravity and decadence are practised.

When several more bodies are discovered mutilated and dumped in a public place, Drakenfeld realizes there's a killer at work who seems to delight in torture and pain. With no motive, no leads and no suspects, he feels like he's running out of options. And in a city where nothing is as it seems, seeking the truth is likely to get him killed . . .

Newton combines strange and vivid creations with very real and pressing concerns with estimable commitment and passion -- China Mieville
Drakenfeld is a flawed yet appealing hero and Newton has wrought a fast-paced fantasy thriller which should appeal to readers of C.J Sansom -- David Barnett * Independent on Sunday *
This is a grounded and realistic example of secondary world-building that works well as an intelligent locked-room mystery and also gives us a cerebral, multi-layered protagonist . . . a world that's challenging and provocative without falling into grimdark cliches. * SFX *
Mark Charan Newton was born in 1981, and holds a degree in Environmental Science. After working in bookselling, he moved into editorial positions at imprints covering film and media tie-in fiction, and later, science fiction and fantasy. Retribution is the second Lucan Drakenfeld novel, following on from Drakenfeld. He currently lives and works in Derbyshire.
GOR006586301
9780230766846
0230766846
Retribution by Mark Charan Newton
Mark Charan Newton
Drakenfeld
Used - Very Good
Hardback
Pan Macmillan
2014-10-23
448
N/A
Book picture is for illustrative purposes only, actual binding, cover or edition may vary.
This is a used book - there is no escaping the fact it has been read by someone else and it will show signs of wear and previous use. Overall we expect it to be in very good condition, but if you are not entirely satisfied please get in touch with us
Trustpilot