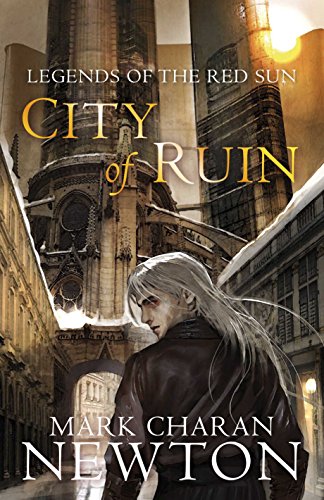 Villiren: a city of sin that is being torn apart from the inside. Hybrid creatures shamble through shadows and barely human gangs fight turf wars for control of the streets.

Amidst this chaos, Commander Brynd Lathraea, commander of the Night Guard, must plan the defence of Viliren against a race that has broken through from some other realm and already slaughtered hundreds of thousands of the Empire's people.

When a Night Guard soldier goes missing, Brynd requests help from the recently arrived Inqusitor Jeryd. He discovers this is not the only disapearance the streets of Villiren. It seems that a serial killer of the most horrific kind is on the loose, taking hundreds of people from their own homes. A killer that cannot possibly be human.

The entire population of Villiren must unite to face an impossible surge of violent and unnatural enemies or the city will fall. But how can anyone save a city that is already a ruin?

Mark Charan Newton was born in 1981, and holds a degree in Environmental Science. After working in bookselling, he moved into publishing, working on film and media tie-in fiction, and later, writing science fiction and fantasy including the Legends of the Red Sun and Drakenfeld series. He currently lives and works in Derbyshire.
GOR002703876
9780230712591
0230712592
City of Ruin by Mark Charan Newton
Mark Charan Newton
Legends of the Red Sun
Used - Very Good
Hardback
Pan Macmillan
2010-06-04
480
N/A
Book picture is for illustrative purposes only, actual binding, cover or edition may vary.
This is a used book - there is no escaping the fact it has been read by someone else and it will show signs of wear and previous use. Overall we expect it to be in very good condition, but if you are not entirely satisfied please get in touch with us
Trustpilot