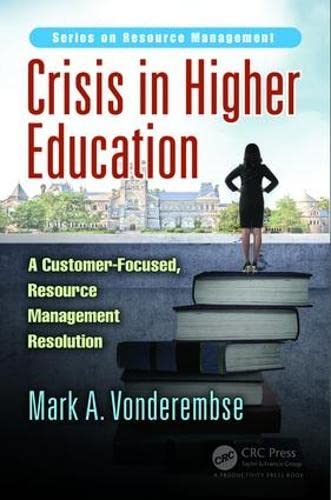 Crisis in Higher Education by Mark A. Vonderembse (The University of Toledo, Ohio, USA)

Crisis in Higher Education: A Customer-Focused, Resource Management Resolution by Mark A. Vonderembse (The University of Toledo, Ohio, USA)

While many students, parents, educators, and organizations who hire their graduates hold US universities in high regard, the cost of higher education has risen much faster than the rate of inflation. High costs, in turn, have severely limited access to higher education for large portions of the US population or caused graduates and those who fall short of graduation to face substantial student loan debt. This book examines the root causes of these underlying problems and offers a comprehensive, easy-to-understand, high-impact solution. The book identifies actions that improve higher education outcomes including lower tuition costs, better access for student from low and middle income homes, faster throughput, fewer dropouts, and better job opportunities for graduates. It links a real and implementable solution to the underlying problems and their root causes. Upon finishing this book, readers should understand why the performance of higher education needs to improve and have solid ideas about how to fix it. The book focuses on public universities, but the ideas discussed are also applicable to private for-profit and not-for-profit universities. The writing style is simple and direct.

Mark A. Vonderembse, PhD, is Professor Emeritus from the University of Toledo (UT) where he spent 38 years as a faculty member. He earned a Ph.D. in Business Administration from the University of Michigan in 1979, an MBA from the Wharton Graduate Division of the University of Pennsylvania in 1973, and a BS in Civil Engineering from UT in 1971. Mark has sixty refereed journal publications including thirteen in the Journal of Operations Management, which is widely regarded as the best journal in the field. He has also published in Management Science, Decision Sciences, International Journal of Production Research, European Journal of Operational Research, among others. He has more than 100 proceeding publications and has published three books and an annotated bibliography. He has nearly two dozen awards for research including Outstanding Researcher at UT. He has more than 40 research grant from various sources including the U.S. Department of Transportation, U.S. Department of Defense, and the National Science Foundation. He has garnered more than $4 million in grants as principal investigator and another $10 million as co-investigator. He has taught a wide variety of courses at the undergraduate, masters, and Ph.D. levels. He has taught in Germany, India, and China, and he has traveled internationally making presentations in China, Hong Kong, Japan, Korea, Singapore, India, Morocco, South Africa, Spain, England, Germany, Greece, and Canada. He has a strong track record in leadership. While at UT, he was the founding Director of the School for Healthcare Business Innovation and Excellence. He was Vice President, and ultimately President, of the Production Operations Management Society's College of Healthcare Operations Management. He was also the founding director of UT's Intermodal Transportation Institute. He was responsible for designing and building an institute that combined resources from four colleges within UT to address regional and national needs for research, education, and planning and technical assistance in the areas of transportation, supply chains, and logistics. He organized an Advisory Board of more the 40 members. He built coalitions with other universities in the region and received two designations as U.S. DOT University Transportation Centers. He was Director of UT's Ph.D. program in Manufacturing and Technology Management for nine years, a program that he co-founded. He also served as Department Chair of Information Operations and Technology Management and of Finance for nine years.

Chapter 5: Focusing on the Ultimate Customer