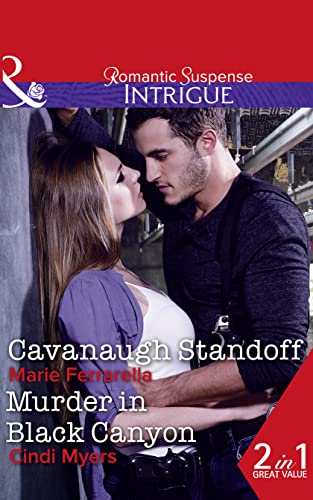 For homicide detective Ronan Cavanaugh O'Bannon, this time it's personal...and totally baffling! The body of a police friend is found executed in the same manner as rival gang members. There's no progress in finding Aurora's serial killer...until Sierra Carlyle joins the team.

The perky young newbie is as chatty and extroverted as Ronan is taciturn and closed off. Frankly, she irritates him, but she's a brilliant, relentless investigator. Working together, facing danger, Sierra's warmth begins to thaw Ronan's iciness. But acting on their undeniable attraction proves unwise now. There's a killer to find and stop...before he sets his sights on a Cavanaugh!

When Kayla Larimer's investigation into a US Senator's missing daughter leads her to a Colorado cult, a murdered FBI Special Agent and the Ranger Brigade's Dylan Holt, the fiercely independent private investigator is determined to ditch the sexy Black Canyon lieutenant and catch the criminals on her own. Dylan admires Kayla's stubborn dedication-even as his protective instincts kick into overdrive. But then a kidnapping attempt on Kayla coincides with the disappearance of the Senator who hired her, and these two opposites must fight a faceless enemy-and their growing attraction-to bring a killer to justice.

This USA TODAY bestselling and RITA (R) Award-winning author has written more than two hundred books for Harlequin Books and Silhouette Books, some under the name Marie Nicole. Her romances are beloved by fans worldwide. Visit her website at www.marieferrarella.com. Cindy Myers became one of the most popular people in eighth grade when she and her best friend wrote a torrid historical romance and passed the manuscript around among friends. Fame was short-lived, alas; the English teacher confiscated the manuscript. Since then, Cindy has written more than 50 published novels. Her historical and contemporary romances and women's fiction have garnered praise from reviewers and readers alike.
GOR008345109
9780263928914
0263928918
Cavanaugh Standoff: Cavanaugh Standoff (Cavanaugh Justice, Book 35) / Murder in Black Canyon (The Ranger Brigade: Family Secrets, Book 1) by Marie Ferrarella
Marie Ferrarella
Used - Very Good
Paperback
HarperCollins Publishers
2017-05-18
448
N/A
Book picture is for illustrative purposes only, actual binding, cover or edition may vary.
This is a used book - there is no escaping the fact it has been read by someone else and it will show signs of wear and previous use. Overall we expect it to be in very good condition, but if you are not entirely satisfied please get in touch with us
Trustpilot