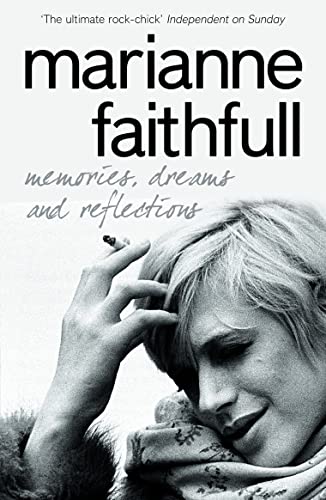 This book is a more personal history than has ever before been written by or about Marianne Faithfull. Anecdotal, conversational, intimate and revealing, this is her no-holds-barred account of her life, her friends, her triumphs and mistakes.

This book is a more personal history than has ever before been written by or about Marianne Faithfull. Anecdotal, conversational, intimate and revealing, this is her no-holds-barred account of her life, her friends, her triumphs and mistakes.

A decade after the publication of 'Faithfull', one of the most acclaimed rock autobiographies of all time, Marianne Faithfull is back, vowing periodically leave her wicked ways behind and grow up, but finding that somehow strange things keep happening.

A wry observer of her slightly off-kilter world, Marianne muses nostalgically about afternoons languishing on Moroccan cushions at George and Pattie's, getting high and listening to new songs. She fondly recalls the outlandish antics of her Beat friends Allen Ginsberg and William Burroughs; is frequently baffled at her image in the press (opening the paper to read of her own demise: 'Sixties Star in Death Plunge'); terrified by the curse sent by Kenneth Anger; mortified by her history of reckless behaviour; not to mention her near-death experience in Singapore while looking for an opium den.

Marianne peoples her anecdotal memoir with legendary characters one can imagine only Marianne assembling around her, both the eccentric and the beautiful, from Henrietta Moraes and Donatella Versace to Sofia Coppola, Juliette Greco, and Yves St. Laurent's dog. Here is Marianne on the dark side of the sixties and the bright side of the nineties, which saw her collaborating with the likes of Blur and Jarvis Cocker; compelling recollections of an unconventional childhood in her father's orgiastic literary commune to a hilariously decadent few days at Lady Caroline Blackwood's deathbed. Here she is her blossoming movie career, on her records as subliminal autobiography. This is as intimate a portrait as we've ever had of Marianne, as she meditates on sex and drugs, confronts her alter-ego, the Fabulous Beast, and faces her own mortality in her battle with breast cancer.

Since her last book Marianne has, in her own words, 'made quite a few records, gone on many tours, tried to play it straight, and... Well, the rest is the subject of this book.'

'She opens up a box of mini-memoirs about the characters she has met. Instantly engaging. Faithfull is able to produce something of grit and newsworthiness.' Observer

Marianne Faithfull is an English singer, songwriter and actress whose career has spanned five decades. She is known, all over the world, as the crown princess of swinging London in the 1960s and 70s, as a singer, and as an actress. She is the author of Faithfull: An Autobiography and Memories, Dreams and Reflections.

GOR001532509
9780007245819
0007245815
Memories, Dreams and Reflections by Marianne Faithfull
Marianne Faithfull
Used - Very Good
Paperback
HarperCollins Publishers
2008-07-07
336
N/A
Book picture is for illustrative purposes only, actual binding, cover or edition may vary.
This is a used book - there is no escaping the fact it has been read by someone else and it will show signs of wear and previous use. Overall we expect it to be in very good condition, but if you are not entirely satisfied please get in touch with us
Trustpilot