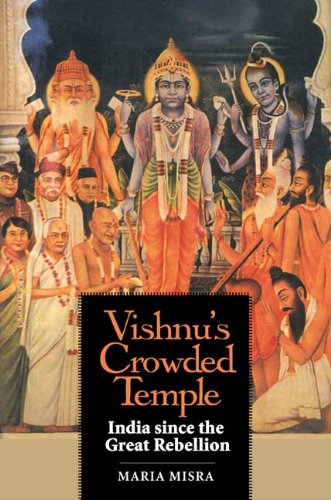 As it enters its sixtieth year of independence, India stands on the threshold of superpower status. Yet India is strikingly different from all other global colossi. While it is the world's most populous democracy and enjoys the benefits of its internationally competitive high-tech and software industries, India also contends with extremes of poverty, inequality, and political and religious violence.

This accessible and vividly written book presents a new interpretation of India's history, focusing particular attention on the impact of British imperialism on Independent India. Maria Misra begins with the rebellion against the British in 1857 and tracks the country's advance to the present day. India's extremes persist, the author argues, because its politics rest upon a peculiar foundation in which traditional ideas of hierarchy, difference, and privilege coexist to a remarkable degree with modern notions of equality and democracy. The challenge of India's leaders today, as in the last sixty years, is to weave together the disparate threads of the nation's ancient culture, colonial legacy, and modern experience.

Maria Misra is university lecturer in modern history and fellow of Keble College, Oxford University. She is the author of Business, Race, and Politics in British India. She lives in Oxford.

GOR008854461
9780300151428
030015142X
Vishnu's Crowded Temple: India since the Great Rebellion by Maria Misra
Maria Misra
Used - Very Good
Paperback
Yale University Press
2009-11-30
592
N/A
Book picture is for illustrative purposes only, actual binding, cover or edition may vary.
This is a used book - there is no escaping the fact it has been read by someone else and it will show signs of wear and previous use. Overall we expect it to be in very good condition, but if you are not entirely satisfied please get in touch with us
Trustpilot