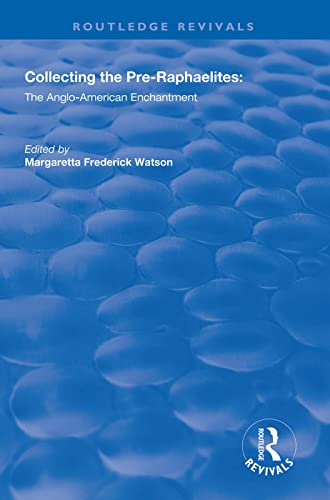 Collecting the Pre-Raphaelites: The Anglo-American Enchantment by Margaretta Frederick Watson

First published in 1997, and written by leading scholars of the day , these fifteen essays examine aspects of the reception and collecting of Pre-Raphaelite Art, the social and cultural context in which the work was favoured and acquired. Two major collections provide the focus for the investigation: that of the Birmingham city Museums and Art Gallery in the United Kingdom, and that of the American Samuel Bancroft Jr, now part of the Delaware Art Museum. The study of these two collections both formed in the late 1890', places Pre-Raphaelite Art at nexus of contemporary cultural issues that touched the lives of both the city council, intent on establishing a public gallery of national importance, and a wealthy American businessman, indulging a private passion for the work of these artists. The contributors approach the issue in a variety of ways, These include the study of the ambitions and self-perception of collectors of the period, an analysis of the impact of John Ruskin's campaign to establish Pre-Raphaelite painting as the 'Art of England' , and its impact on notions of civic and national identity ; the examination of individual painting in relation to such issues as the portrayal of women, the nude and of religious subjects ; and the study of the Victorian preoccupation with Renaissance Italy and the attempt by Ruskin, Charles Fairfax Murray , advisor to the two collections, and the Grosvenor Gallery, to proclaim the Pre-Raphaelite artists as the true inheritors of the 'genius' of Renaissance Italian artists.These essays were first presented at a symposium held at the Delaware Art Museum during the exhibition there of the paintings of Birmingham City Museums and Art Gallery.

NLS9781138313026
9781138313026
1138313025
Collecting the Pre-Raphaelites: The Anglo-American Enchantment by Margaretta Frederick Watson
Margaretta Frederick Watson
Routledge Revivals
New
Paperback
Taylor & Francis Ltd
2020-06-30
244
N/A
Book picture is for illustrative purposes only, actual binding, cover or edition may vary.
This is a new book - be the first to read this copy. With untouched pages and a perfect binding, your brand new copy is ready to be opened for the first time
Trustpilot