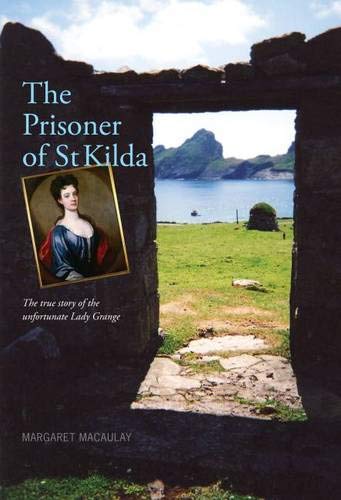 The Prisoner of St Kilda by Margaret Macaulay

So began the stormy marriage between Lord and Lady Grange, a marriage which was to end with Lady Grange's death on the Isle of Skye after 13 years in exile.

The Prisoner of St Kilda: The True Story of the Unfortunate Lady Grange by Margaret Macaulay

In the 18th century shotgun weddings were not unusual, but in most cases it wasn't the bride that was holding the gun. So began the stormy marriage between Lord and Lady Grange, a marriage which was to end with Lady Grange's death on the Isle of Skye after 13 years in exile.

The daughter of a convicted murderer, Lady Grange's behaviour, such as her fondness for drink, was so outrageous that her sudden disappearance from public life was not considered surprising. But few knew the true story of her disappearance.

This book reveals, for the first time, how the unfortunate lady was violently kidnapped and transported to the remote islands off the west coast of Scotland, spending seven years on the island of St. Kilda's. Condemned to a very different lifestyle than she had enjoyed in Edinburgh, and baffled by the strange tongue of the Gaelic West, she still obstinately survived, finally dying in Skye in 1745.

... a tale of such scandal and drama that it reads almost like a work of fiction. - Catherine Salmond, Edinburgh Evening News

... this fascinating account of one of the most beguiling characters in Scotland's history... Despite the unhappy ending, it's a stunning story and Margaret Macaulay has done it full justice. - Trevor Royle, The Herald

Yet there's another story of human hardship in [St Kilda]'s history that's been much less analysed - not one of evacuation but of abduction. Not of escape, but of exile. A story of political intrigue, betrayal and personal tragedy. - Sunday Post

MARGARET MACAULAY was born in Campbeltown, Argyll, in 1934 and educated at Campbeltown Grammar School. She graduated from Glasgow University in 1956 with an M.A. Hons. in History. She worked on The Herald, as a freelance journalist, a teacher and as a bookseller.

GOR002860225
9781906817657
1906817650
The Prisoner of St Kilda: The True Story of the Unfortunate Lady Grange by Margaret Macaulay
Margaret Macaulay
Used - Good
Paperback
Luath Press Ltd
20100607
192
N/A
Book picture is for illustrative purposes only, actual binding, cover or edition may vary.
This is a used book - there is no escaping the fact it has been read by someone else and it will show signs of wear and previous use. Overall we expect it to be in good condition, but if you are not entirely satisfied please get in touch with us
Trustpilot