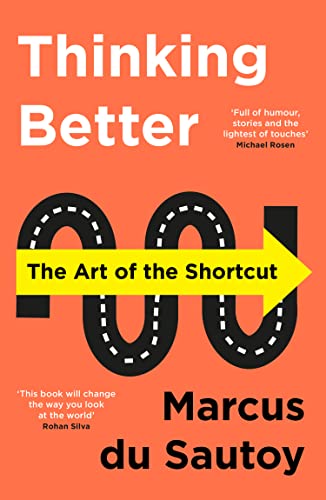 How do you remember more and forget less?

How can you earn more and become more creative just by moving house?

And how do you pack a car boot most efficiently?

This is your shortcut to the art of the shortcut.

Thinking Better: The Art of the Shortcut by Marcus du Sautoy

How do you remember more and forget less?

How can you earn more and become more creative just by moving house?

And how do you pack a car boot most efficiently?

This is your shortcut to the art of the shortcut.

Mathematics is full of better ways of thinking, and with over 2,000 years of knowledge to draw on, Oxford mathematician Marcus du Sautoy interrogates his passion for shortcuts in this fresh and fascinating guide. After all, shortcuts have enabled so much of human progress, whether in constructing the first cities around the Euphrates 5,000 years ago, using calculus to determine the scale of the universe or in writing today's algorithms that help us find a new life partner.

As well as looking at the most useful shortcuts in history - such as measuring the circumference of the earth in 240 BC to diagrams that illustrate how modern GPS works - Marcus also looks at how you can use shortcuts in investing or how to learn a musical instrument to memory techniques. He talks to, among many, the writer Robert MacFarlane, cellist Natalie Clein and the psychologist Suzie Orbach, asking whether shortcuts are always the best idea and, if so, when they use them.

With engaging puzzles and conundrums throughout to illustrate the shortcut's ability to find solutions with speed, Thinking Better offers many clever strategies for daily complex problems.

'If you thought Maths was all about long stuff, like long division and long multiplication and taking a long, long time to figure things out, Marcus du Sautoy shows that it's just the opposite. Full of humour, stories and the lightest of touches, this is a sight-seeing tour of some of the world's greatest neat dodges, unexpected turns and useful cut-throughs. Prepare to be caught short' Michael Rosen

'This book will change the way you look at the world. It's chock full of stories, ideas and clever tricks - I loved it. Marcus is a maestro at making big ideas come alive - he deserves his place alongside Richard Dawkins, E. O. Wilson and Carlo Rovelli in the pantheon of great modern science writers' Rohan Silva, CEO and founder of Second Home

'If mathematics has proved anything, it is that shortcuts can change the world. Marcus du Sautoy has come up with a smart, well written and entertaining guide to the connecting tunnels, underpasses and other tricks to traverse the trials of everyday life' Roger Highfield, author, broadcaster and Science Director at the Science Museum

'The joy of du Sautoy's book isn't really the art of the real-world shortcut at all. It is the romp through mathematical ideas, from place value to non Euclidean geometry to probability theory...There are vivid historical examples of scientists and others using mathematical ideas to solve problems' Tim Harford, Financial Times

Marcus du Sautoy is Professor of Mathematics at the University of Oxford and a Fellow of the Royal Society. In 2008 he was appointed to the university's prestigious professorship as the Simonyi Chair for the Public Understanding of Science, a post previously held by Richard Dawkins. He has presented numerous radio and TV programmes, including a four-part landmark TV series for the BBC called The Story of Maths. He works extensively with a range of arts organisations bringing science alive for the public, from the Royal Opera House to the Glastonbury Festival.

NGR9780008393953
9780008393953
0008393958
Thinking Better: The Art of the Shortcut by Marcus du Sautoy
Marcus du Sautoy
New
Paperback
HarperCollins Publishers
2022-07-07
352
N/A
Book picture is for illustrative purposes only, actual binding, cover or edition may vary.
This is a new book - be the first to read this copy. With untouched pages and a perfect binding, your brand new copy is ready to be opened for the first time
Trustpilot