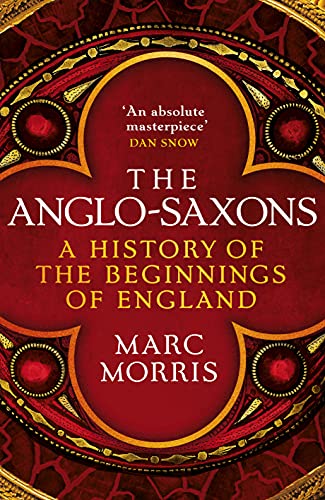 The Anglo-Saxons by Marc Morris

The Anglo-Saxons: A History of the Beginnings of England by Marc Morris

'Beautifully written, incredibly accessible and deeply researched' JAMES O'BRIEN
__________________
Sixteen hundred years ago Britain left the Roman Empire and swiftly fell into ruin. Grand cities and luxurious villas were deserted and left to crumble, and civil society collapsed into chaos. Into this violent and unstable world came foreign invaders from across the sea, and established themselves as its new masters.

The Anglo-Saxons traces the turbulent history of these people across the next six centuries. It explains how their earliest rulers fought relentlessly against each other for glory and supremacy, and then were almost destroyed by the onslaught of the Vikings. It explores how they abandoned their old gods for Christianity, established hundreds of churches and created dazzlingly intricate works of art. It charts the revival of towns and trade, and the origins of a familiar landscape of shires, boroughs and bishoprics.

It is a tale of famous figures like King Offa, Alfred the Great and Edward the Confessor, but also features a host of lesser known characters - ambitious queens, revolutionary saints, intolerant monks and grasping nobles. Through their remarkable careers we see how a new society, a new culture and a single unified nation came into being.

Drawing on a vast range of original evidence - chronicles, letters, archaeology and artefacts - renowned historian Marc Morris illuminates a period of history that is only dimly understood, separates the truth from the legend, and tells the extraordinary story of how the foundations of England were laid.
__________________
'This is top-notch narrative history ... A big gold bar of delight' SPECTATOR

An absolute masterpiece. It feels like the missing piece of historiography on an essential period of our past. Marc Morris is the platonic ideal of scholarly yet readable big history. * DAN SNOW *
A rich trove of ancient wonders, worthy of many a night in the mead hall, listening to its telling! Yet it is also a book for our time ... Marc Morris is a genius of medieval narrative, and I am full of admiration. * IAN MORTIMER *
A deep dive into one of the murkiest ages in our national history ... Morris is an accomplished guide to the tricksy Anglo-Saxon world ... Clever, lively ... splendid new book. * DAN JONES, Sunday Times *
Brilliant ... Beautifully written, incredibly accessible and deeply researched. I couldn't recommend it more highly. * JAMES O'BRIEN *
The people and times are brought vividly back to life allowing the reader to see, perhaps for the first time, the foundations of modern England ... A remarkable achievement. Marc's book will surely become a must-read for any student of English history, and particularly of this woefully overlooked, but vital, period. * JUSTIN POLLARD *
Dr Marc Morris is a historian who specializes in the Middle Ages. He studied and taught at the universities of London and Oxford and is a Fellow of the Royal Historical Society. His other books include a bestselling history of the Norman Conquest and highly acclaimed biographies of King John and Edward I (A Great and Terrible King). He also presented the TV series Castle and wrote its accompanying book. He contributes regularly to other history programmes on radio and television and writes for numerous journals and magazines.
GOR011431807
9781786330994
1786330997
The Anglo-Saxons: A History of the Beginnings of England by Marc Morris
Marc Morris
Used - Like New
Hardback
Cornerstone
20210520
528
null null null null null null null null null null
Book picture is for illustrative purposes only, actual binding, cover or edition may vary.
The book has been read, but looks new. The book cover has no visible wear, and the dust jacket is included if applicable. No missing or damaged pages, no tears, possible very minimal creasing, no underlining or highlighting of text, and no writing in the margins
Trustpilot