The Ruin of All Witches Malcolm Gaskill 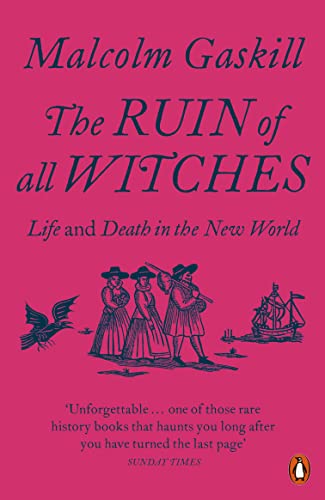 The Ruin of All Witches by Malcolm Gaskill

The Ruin of All Witches: Life and Death in the New World by Malcolm Gaskill

*SHORTLISTED FOR THE WOLFSON HISTORY PRIZE*
*A TIMES, SUNDAY TIMES AND BBC HISTORY BOOK OF THE YEAR*

In the frontier town of Springfield in 1651, peculiar things begin to happen. Precious food spoils, livestock ails and property vanishes. People suffer fits and are plagued by strange visions and dreams. Children sicken and die. As tensions rise, rumours spread of witches and heretics, and the community becomes tangled in a web of spite, distrust and denunciation. The finger of suspicion falls on a young couple struggling to make a home and feed their children: Hugh Parsons the irascible brickmaker and his troubled wife, Mary. It will be their downfall.

The Ruin of All Witches tells the dark, real-life folktale of witch-hunting in a remote Massachusetts plantation. These were the turbulent beginnings of colonial America, when English settlers' dreams of love and liberty, of founding a 'city on a hill', gave way to paranoia and terror, enmity and rage. Drawing on uniquely rich, previously neglected source material, Malcolm Gaskill brings to life a New World existence steeped in the divine and the diabolic, in curses and enchantments, and precariously balanced between life and death.

Through the gripping micro-history of a family tragedy, we glimpse an entire society caught in agonized transition between supernatural obsessions and the age of enlightenment. We see, in short, the birth of the modern world.

'A great story, exquisitely told. This book is history at its illuminative best' The Times

'As compelling as a campfire story ... Gaskill brings this sinister past vividly to life' Erica Wagner, Financial Times

A bona fide historical classic ... Historical writing of the very highest class, impeccably researched and written with supreme imagination and wisdom. -- Dominic Sandbrook * Sunday Times *
Unforgettable ... Whether you read The Ruin of All Witches for a startling insight into another age, or see its portrait of mob hysteria and witch-hunts as darkly analogous to our own uneasy times, this is one of those rare history books that stays with you and haunts you long after you have turned the last page. Superb. -- Christopher Hart * Sunday Times *
Breathtaking ... a great story, exquisitely told. I had to reread certain sentences aloud, just to savour their insight and cadence ... This book is history at its illuminative best. -- Gerard DeGroot * The Times *
The narrative is as compelling as a campfire story ... This is deeply atmospheric writing, carefully sourced ... As with the best history, the lessons of Springfield's past may serve to inform the citizens of a still-divided and conflicted nation. -- Erica Wagner * Financial Times *
Evocative right from the start, the reader is drawn in and excited in both body and mind ... It's a feast ... a valuable gift to every reader of history. -- Marion Gibson * BBC History Magazine *
A portrait of a community during one of the first Puritan witch panics in the New World - and a timeless study of how paranoia, superstition and social unrest fuel fantasies ... Mr Gaskill's immersive approach brings the fate of his subjects movingly to life. * The Economist *
Simply one of the best history books I have ever read ... His deeply imaginative, empathetic and yet empirical exploration of a past moment of crisis is history at its finest. -- Suzannah Lipscomb * BBC History *
A rich and beautifully written microhistory ... a work of remarkable historical reconstruction. -- Edward Vallance * Literary Review *
Malcolm Gaskill shows us with filmic vividness the daily life of the riven, marginal community of Springfield, where settlers from a far country dwell on the edge of the unknown. The clarity of his thought and his writing, his insight, and the immediacy of the telling, combine to make this the best and most enjoyable kind of history writing. Malcolm Gaskill goes to meet the past on its own terms and in its own place, and the result is thought-provoking and absorbing. -- Hilary Mantel
A surefooted and gripping narrative ... Gaskill's Springfield joins Emmanuel Le Roy Ladurie's Montaillou, Tony Wrigley's Colyton and other places of little intrinsic importance which for one reason or another have been immortalised by modern historiography... There is currently no memorial for Hugh and Mary Parsons in Springfield like those which have been erected in other places where witches were hunted. Perhaps they will get one now. -- Keith Thomas * London Review of Books *
An impressively researched account, bringing to life the fears and preoccupations of obscure and humble people, and setting them in the context of their time and place. -- Richard Francis * The Spectator *
Powerfully evocative, a grimly compelling morality tale with more than one unexpected twist ... an outstanding achievement, haunting, revelatory and superbly written - a strong contender for the best history book of 2021. -- Andrew Lynch * Irish Independent *
A pulsating history of sorcery and superstition ... an academic feat but reads like a Stephen King thriller - and it's just right for our conspiracy-laden times. -- Robert Epstein * The i *
A riveting micro-history, brilliantly set within the broader social and cultural history of witchcraft. Drawing on previously neglected source material, this book is elegantly written and full of intelligent analysis. * Wolfson History Prize 2022 *
Malcolm Gaskill is Emeritus Professor of Early Modern History at the University of East Anglia. One of Britain's leading experts in the history of witchcraft, his works include the highly acclaimed Witchfinders: A Seventeenth-Century English Tragedy and Between Two Worlds: How the English Became Americans.
GOR012564694
9780141991481
0141991488
The Ruin of All Witches: Life and Death in the New World by Malcolm Gaskill
Malcolm Gaskill
Used - Like New
Paperback
Penguin Books Ltd
20221006
336
N/A
Book picture is for illustrative purposes only, actual binding, cover or edition may vary.
The book has been read, but looks new. The book cover has no visible wear, and the dust jacket is included if applicable. No missing or damaged pages, no tears, possible very minimal creasing, no underlining or highlighting of text, and no writing in the margins
Trustpilot