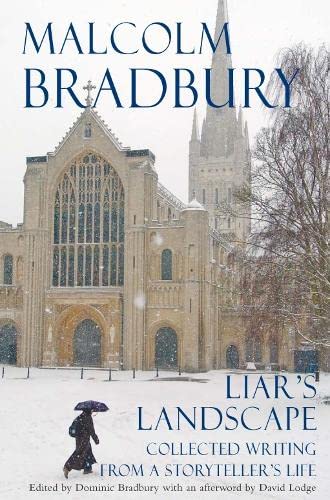 The final volume from the late, great Sir Malcolm Bradbury

'What is written lives far longer than we do -- or so we would like to think.' From unfinished novel to unsent letters, from prose to play, from Macclesfield to the New Year's Honours List, Liar's Landscape is evidence of the late great author's versatility, wit and passion for the written word.

When Sir Malcolm Bradbury died in 2000, he left behind a lifetime's work; some of it published and some of it not; fiction and non-fiction; short stories and novels; completed work, work in progress, work barely begun; plans, sketches, notes, titles. Given shape and coherence by his son, Dominic, that work has now become Liar's Landscape, a book about books, about writing and writers, about being a writer and, of course, about being Malcolm Bradbury.

'Liar's Landscape is essential reading for all admirers of Malcolm Bradbury and, for those who don't know his work, an invaluable sampler of his worldly-wise humour and satirical wit' Tom Rosenthal, Independent

Malcolm Bradbury was a well-known novelist, critic and academic. He co-founded the famous creative writing department at the University of East Anglia, whose students have included Ian McEwan and Kazuo Ishiguro. His novels are Eating People is Wrong (1959); Stepping Westward (1965); The History Man (1975), which won the Royal Society of Literature Heinemann Prize; Rates of Exchange (1983), which was shortlisted for the Booker Prize; Cuts (1987); Doctor Criminale (1992); and To the Hermitage (2000). He wrote several works of non-fiction, humour and satire, including Who Do You Think You Are? (1976), All Dressed Up and Nowhere to Go (1982) and Why Come to Slaka? (1991). He was an active journalist and a leading television writer, responsible for the adaptations of Porterhouse Blue, Cold Comfort Farm and many TV plays and episodes of Inspector Morse, A Touch of Frost, Kavanagh QC and Dalziel and Pascoe. He was awarded a knighthood in 2000 for services to literature and died later the same year. Dominic Bradbury is a writer and journalist. He has written a number of books on architecture and design and contributes to many magazines and newspapers, including the Sunday Times and Daily Telegraph . He lives in Norfolk.
GOR003423487
9780330435338
0330435337
Liar's Landscape: Collected Writing from a Storyteller's Life by Malcolm Bradbury
Malcolm Bradbury
Used - Very Good
Paperback
Pan Macmillan
2007-01-19
448
N/A
Book picture is for illustrative purposes only, actual binding, cover or edition may vary.
This is a used book - there is no escaping the fact it has been read by someone else and it will show signs of wear and previous use. Overall we expect it to be in very good condition, but if you are not entirely satisfied please get in touch with us
Trustpilot