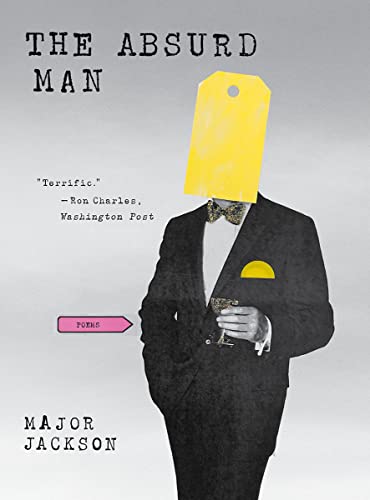 The Absurd Man by Major Jackson

In this knock-out collection, Major Jackson savours the complexity between perception and reality, the body and desire, accountability and judgment.

Inspired by Albert Camus's seminal Myth of Sisyphus, Major Jackson's fifth volume subtly configures the poet as absurd hero and plunges headfirst into a search for stable ground in an unstable world. We follow Jackson's restless, vulnerable speaker as he ponders creation in the face of meaninglessness, chronicles an increasingly technological world, and the difficulty of social and political unity, probes a failed marriage and grieves his lost mother with a stunning, lucid lyricism.

The arc of a man emerges; he bravely confronts his past, including his betrayals and his mistakes, and questions who he is as a father, as a husband, as a son and as a poet. With intense musicality and verve, The Absurd Man also faces outward, finding refuge in intellectual and sensuous passions. At once melancholic and jubilant, Jackson considers the journey of humanity, with all its foibles, as a sacred pattern of discovery reconciled by art and the imagination.

Erudite... Moments of startling linguistic play interrupt Jackson's elegant semiformal style... [The Absurd Man] bring[s] us back to an existential truth that only poetry's fierce tenderness can offer. -- Sandra Simonds - The New York Times Book Review
Major Jackson is the author of five volumes of poems, including Roll Deep and Leaving Saturn, which won the Cave Canem Poetry Prize for a first book of poems. The poetry editor of the Harvard Review, Jackson lives in South Burlington, Vermont.
NGR9780393867411
9780393867411
0393867412
The Absurd Man: Poems by Major Jackson
Major Jackson
New
Paperback
WW Norton & Co
20210924
112
N/A
Book picture is for illustrative purposes only, actual binding, cover or edition may vary.
This is a new book - be the first to read this copy. With untouched pages and a perfect binding, your brand new copy is ready to be opened for the first time
Trustpilot