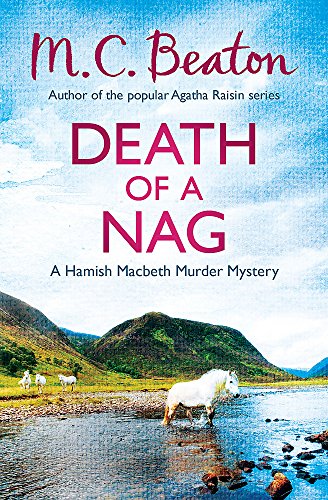 Death of a Nag by M. C. Beaton

Death of a Nag by M. C. Beaton

After a romantic disappointment and an undeserved demotion, Scots village bobby Hamish Macbeth decides a week's holiday at the coastal village of Skag might be just the ticket.

He's dead wrong, of course: the food is dire, and the man in the next room nags his wife so loudly and continuously that more than one person at the Friendly House bed-and-breakfast wishes him dead, though only Hamish is heard threatening him.

When this chap's body is found floating in the river Skag, Hamish is the prime suspect. While clearing his name, the lanky Scot has to deal with the widow who's suddenly making eyes at a refined bachelor, two leather-skirted Glaswegian beauties intent on raising disco hell, and the rude revelation of one family man's secret life. Some holiday!

Beaton's Hamish MacBeth stories are always good, but the latest is a standout. The plot is even better than usual, the characters are more engaging, and even the mostly dour and serious Hamish is funnier and more likable than usual. * Booklist *
Beaton has fine-tuned her MacBeth series into something altogether winning. In this 11th entry, her plot is top-notch, a few somber notes demonstrate her touch for understated compassion and, as always, Hamish and his highland cohorts are lovingly rendered. * Publishing News *
M.C. Beaton is the internationally bestselling author of both the Agatha Raisin and Hamish Macbeth series, as well as numerous Regency romances. Her books have been translated into seventeen languages and her Agatha Raisin mysteries have been made into a Sky TV series starring Ashley Jensen. M. C. Beaton is consistently the most borrowed UK adult author in British libraries. She lives in a Cotswold village that is very much like Agatha's beloved Carsely.
GOR010463860
9781472105301
1472105303
Death of a Nag by M. C. Beaton
M. C. Beaton
Hamish Macbeth
Used - Like New
Paperback
Little, Brown Book Group
2013-09-19
304
N/A
Book picture is for illustrative purposes only, actual binding, cover or edition may vary.
The book has been read, but looks new. The book cover has no visible wear, and the dust jacket is included if applicable. No missing or damaged pages, no tears, possible very minimal creasing, no underlining or highlighting of text, and no writing in the margins
Trustpilot