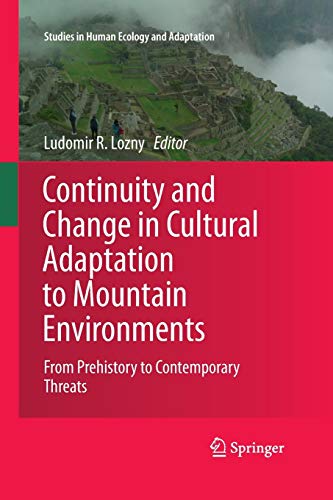 This volume will be of interest to anthropologists, ecologists and geologists as mountainous landscapes change fast and cultures disappear and they need to be recorded, and mountain regions are of interest for studies on environmental change and cultural responses of mountain populations provide clues for us all.

Continuity and Change in Cultural Adaptation to Mountain Environments: From Prehistory to Contemporary Threats by Ludomir R Lozny

Up until now, mountain ecosystems have not been closely studies by social scientists as they do not offer a readily defined set of problems for human exploitation as, do for instance, tropical forests or arctic habitats. But the archaeological evidence had shown that humans have been living in this type of habitat for thousands of year.

From this evidence we can also see that mountainous regions are often frontier zones of competing polities and form refuge areas for dissident communities as they often are inherently difficult to control by centralized authorities. As a consequence they fuel or contribute disproportionately to political violence. But we are now witnessing changes and increasing vulnerability of mountain ecosystems caused by human activities.

Human adaptability to mountain ecosystems This volume presents an international and interdisciplinary account of the exploitation of--and human adaptation to--mountainous regions over time. The contributions discuss human cultural responses to key physical and cultural stressors associated with mountain ecosystems, such as aridity, quality of soils, steep slopes, low productivity, as well as transient phenomena such as changing weather patterns, deforestation and erosion, and the possible effects of climate change.

This volume will be of interest to anthropologists, ecologists and geologists as mountainous landscapes change fast and cultures disappear and they need to be recorded, and mountain regions are of interest for studies on environmental change and cultural responses of mountain populations provide clues for us all. Critical to understanding mountain adaptations is our comprehension of human decision-making and how people view short- and long-term outcomes.

"This volume presents papers from various disciplines with the same focus: to identify and evaluate human relationships with mountain ecosystems. ... The broad scope of topics makes this book a practical introduction to the various issues affecting mountain people in the past and the present. ... an approachable introductory volume for students and scholars from any background with an interest in the study of human adaptations to mountain environments." (Genevieve Dewar, Canadian Journal of Archaeology, Vol. 38 (1), 2014)

"this is a book of two halves.... The first deals with archaeological and historical surveys in the Alps and the Pyrenees; the second half focuses on studies of contemporary mountain communities, addressing the social, economic and political challenges faced by those living in upland areas of countries including Bolivia, Nepal, China, and the Philippines. In the thematic context of the volume, these later chapters intersect well with the earlier ones--- not least , these communities demonstrate strong historical identities and provide potentially interesting models for other mountain societies in the past, as well as ideas about sustainable social and economic organisation for the future" (Robert Witcher, Antiquity, Vol. 87, 2013)

Ludomir Lozny is current managing editor of the journal Human Ecology, and an adjunct professor at Hunter College in the Department of Archaeology.
NLS9781489994851
9781489994851
1489994858
Continuity and Change in Cultural Adaptation to Mountain Environments: From Prehistory to Contemporary Threats by Ludomir R Lozny
Ludomir R Lozny
Studies in Human Ecology and Adaptation
New
Paperback
Springer-Verlag New York Inc.
2015-04-05
410
N/A
Book picture is for illustrative purposes only, actual binding, cover or edition may vary.
This is a new book - be the first to read this copy. With untouched pages and a perfect binding, your brand new copy is ready to be opened for the first time
Trustpilot