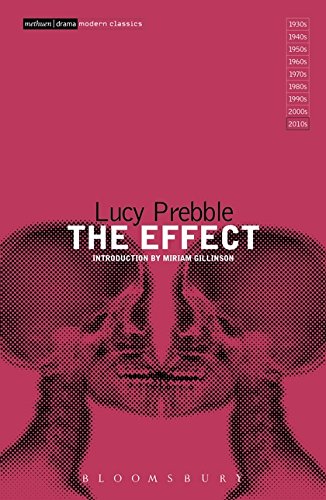 The Effect by Lucy Prebble

The Effect by Lucy Prebble

I can tell the difference between who I am and a side effect. The Effect is a clinical romance. Two young volunteers, Tristan and Connie, agree to take part in a clinical drug trial. Succumbing to the gravitational pull of attraction and love, however, Tristan and Connie manage to throw the trial off-course, much to the frustration of the clinicians involved. This funny, moving and perhaps surprisingly human play explores questions of sanity, neurology and the limits of medicine, alongside ideas of fate, loyalty and the inevitability of physical attraction. Following on from the critical and commercial success of Enron, The Effect offers a vibrant theatrical exploration into the human brain via the heart. It received its world premiere at the National Theatre's Cottesloe Theatre in November 2012, starring Billie Piper and Jonjo O'Neill. It is published here in the Modern Classics series alongside an introduction by Miriam Gillinson.
Lucy Prebble is a playwright blessed with an exceptionally fine mind . . . the play struck me as being both wise and sane, raising more questions than it answers, to be sure, but that seems a sign of integrity in a work dealing with such a complex subject. But what makes The Effect so special, is that as well as being a play of ideas, it is also deeply moving, both in its depiction of the giddy wonder of love, and also in its account of the terrifying wasteland of depression itself . . . The Effect is an astonishingly rich and rewarding play, as intelligent as it is deeply felt. * Daily Telegraph *
Lucy Prebble's follow-up to Enron is a scintillating exploration of the clash between scientific advance and human impulse ... it demonstrates the same vivid, provocative intelligence * Financial Times *
This four-hander brings the author's agile wit, intellectual penetration and a fresh, deeply affecting empathy to bear on a fundamentally much more complex topic than finance: brain chemistry and what it can - and cannot - tell us about the causes of severe depression and the experience of being in love ... This is a provocative and challenging play ... it ends in edgy gesture of good sense that made me feel like cheering. * Independent *
After her hit with Enron, Lucy Prebble turns to medicine and the mind - to great effect ... The Effect is a four-hander that hopscotches confidently across themes of neurology, psychopharmacology, depression, love and guilt . . . The Effect moves you to thought, sometimes to strong feeling. * Sunday Times *
Prebble has written a profound and stirring play. The material is complex but always accessible, the drama serious and informative yet deeply human, with the odd jolt of piercing humour. The Effect confirms her as one of the most intelligent voices in British theatre. * Evening Standard *
Incisive dialogue . . . Prebble really researches and the range of her subjects suggests she will have a long theatrical life * Observer *
The Effect is a headlong delve into the mysteries of the human brain. And Prebble pulls it off with assurance, tickling our cerebellums in the first half, before tugging on our heartstrings in the second . . . heartbreaking . . . [it has] a heart as well as a brain. * Time Out *
Lucy Prebble's absorbing drama, a hit . . . Taut, intelligent * The Times *
This is a knotty drama, dealing with scientific objectivity, guilt, the mysteries of the human heart and brain and what makes us who we are, wrapped up in a deceptively simple and constantly entertaining package. * Guardian *
Lucy Prebble's smash-hit play, Enron, transferred to the West End and Broadway in 2010 after sell out runs at both the Royal Court and Chichester Festival Theatre winning the award for best New Play at the prestigious TMA Theatre Awards, and was shortlisted for the Evening Standard Award 2009. In 2004 Prebble won the prestigious George Devine Award, followed by the TMA Award for Best New Play and the Critics' Circle Award for Most Promising Playwright. Miriam Gillinson reviews theatre for Time Out and The Arts Desk, and writes about children's theatre for the Guardian. She is a script reader for Sonia Friedman Productions, Playful Productions and United Agents, reads for the Bruntwood Prize and the Susan Smith Blackburn Prize and works as a Quality Assessor for The Arts Council.
GOR009268183
9781474272018
1474272010
The Effect by Lucy Prebble
Lucy Prebble
Modern Classics
Used - Very Good
Paperback
Bloomsbury Publishing PLC
2016-09-08
104
N/A
Book picture is for illustrative purposes only, actual binding, cover or edition may vary.
This is a used book - there is no escaping the fact it has been read by someone else and it will show signs of wear and previous use. Overall we expect it to be in very good condition, but if you are not entirely satisfied please get in touch with us
Trustpilot