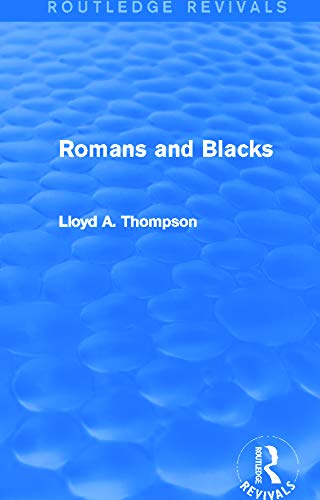 Romans and Blacks by Lloyd A. Thompson

Romans and Blacks by Lloyd A. Thompson

Roman literature seems to provide plenty of instances of contempt towards foreign or black individuals, but it is an untenable assumption that such distaste amounts to a racist attitude, particularly considering how elusive the definitions of 'race' and 'racism' are.

Making extensive use of developments in sociological theory and psychology, Romans and Blacks, first published in 1989, presents an innovative and illuminating picture of black-white relations in Roman society. It is argued that 'race' as a somatic identification that entails permanent and genetically transmitted social disabilities was absent, and that the main deference-entitling distinctions in the Roman world were socio-cultural rather than somatic. Therefore, Professor Thompson concludes, references to black skins and negroid features should be interpreted in aesthetic terms.

This wide-ranging study brings welcome clarity to the discussion of blacks in the Roman world, and is valuable for all students of race relations as well as classicists and historians.