Race After the Internet Lisa Nakamura (University of Illinois at Urbana-Champaign, USA) 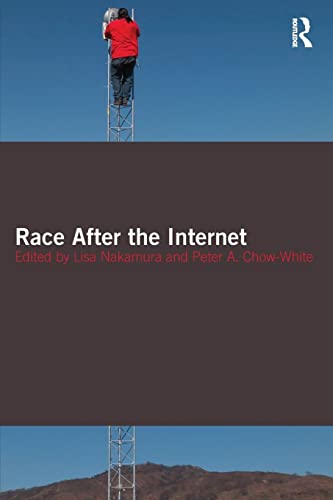 Race After the Internet by Lisa Nakamura (University of Illinois at Urbana-Champaign, USA)

Race After the Internet by Lisa Nakamura (University of Illinois at Urbana-Champaign, USA)

In Race After the Internet, Lisa Nakamura and Peter Chow-White bring together a collection of interdisciplinary, forward-looking essays exploring the complex role that digital media technologies play in shaping our ideas about race. Contributors interrogate changing ideas of race within the context of an increasingly digitally mediatized cultural and informational landscape. Using social scientific, rhetorical, textual, and ethnographic approaches, these essays show how new and old styles of race as code, interaction, and image are played out within digital networks of power and privilege.

Race After the Internet includes essays on the shifting terrain of racial identity and its connections to social media technologies like Facebook and MySpace, popular online games like World of Warcraft, YouTube and viral video, WiFi infrastructure, the One Laptop Per Child (OLPC) program, genetic ancestry testing, and DNA databases in health and law enforcement. Contributors also investigate the ways in which racial profiling and a culture of racialized surveillance arise from the confluence of digital data and rapid developments in biotechnology. This collection aims to broaden the definition of the "digital divide" in order to convey a more nuanced understanding of access, usage, meaning, participation, and production of digital media technology in light of racial inequality.

'The hope that the internet will promote tolerance, liberated sensibility and social inclusion is attacked with flair, insight and extensive evidence in this fine book that will be of interest to academics and students around the world.' James Curran, Professor of Communications, Goldsmiths, University of London

'This is a must-have collection. Bringing together distinguished authors and emergent voices, Race After the Internet breaks new material ground in a field hampered by immaterialist fantasies. We are fortunate that crucial questions of race and new media are being investigated by such skilled and adventurous writers.' Toby Miller, Professor of Media & Cultural Studies, University of California Riverside

'The volume adds more examples and analyses to existing scholarship about the meaning of race in the digital age by arguing that race is not a representation that media users consume, but is a type of code they perform. The authors examine the race-based digital divide, the establishment and reinforcement of digital segregation and "ghettos", digital codes, and biotechnology....an accessible book for upper-level academic audiences.' Y. Kiuchi, Michigan State University

Lisa Nakamura is Associate Professor of Media and Cinema Studies and Director of the Asian American Studies Program at the University of Illinois, Urbana-Champaign. She is the author of Cybertypes: Race, Ethnicity, and Identity on the Internet, coeditor, with Beth Kolko and Gilbert Rodman, of Race in Cyberspace , and co-editor, with Peter Chow-White, of Race After the Internet (Routledge, 2011). Peter A. Chow-White is an Assistant Professor in the School of Communication at Simon Fraser University in Vancouver, Canada. His work has appeared in Communication Theory, the International Journal of Communication, Media, Culture & Society, PLoS Medicine, and Science, Technology & Human Values.
Wendy Chun, Tara McPherson, Rayvon Fouche, Curtis Marez, Alexander Galloway, Oscar Gandy, Anna Everett, Christian Sandvig, danah boyd, Ernie Wilson, Sasha Costanza-Chock, Eszter Hargittai, Alondra Nelson, Peter Chow-White, Troy Duster
NLS9780415802369
9780415802369
0415802369
Race After the Internet by Lisa Nakamura (University of Illinois at Urbana-Champaign, USA)
Lisa Nakamura (University of Illinois at Urbana-Champaign, USA)
New
Paperback
Taylor & Francis Ltd
2011-10-05
346
N/A
Book picture is for illustrative purposes only, actual binding, cover or edition may vary.
This is a new book - be the first to read this copy. With untouched pages and a perfect binding, your brand new copy is ready to be opened for the first time
Trustpilot