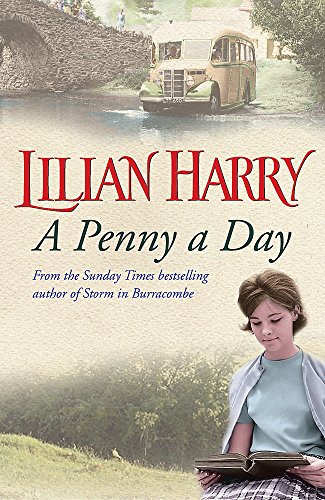 A Penny A Day by Lilian Harry

April Grove and Burracombe characters are linked in this touching Lilian Harry novel.

A Penny A Day by Lilian Harry

April Grove and Burracombe characters are linked in this touching Lilian Harry novel.

It is December 1952. A wedding is being planned in April Grove, Portsmouth, and Jess and Frank Budd want to bring together all their friends and neighbours. They even invite Stella Simmons and her sister Maddy, who now live in the Devonshire village of Burracombe.

Dan and Ruth Hodges attend, together with Dan's son Sammy, who immediately falls in love with his childhood playmate Maddy. But Stephen Napier, son of the Squire of Burracombe, proves a strong rival and Maddy is not yet ready to make such a momentous decision about her life.

Meanwhile, Ruth's niece Lizzie and her husband Alec seem to have overcome the problems they encountered when Alec returned from the POW camp which almost broke him. But their happiness is threatened when a face from Lizzie's past reappears in her life and turns everything upside down.

Lilian Harry grew up in Gosport, on the shores of Portsmouth Harbour, and now lives on the edge of Dartmoor with two miniature schnauzers who allow her just enough room on the sofa. She is a keen bellringer and walker, and enjoys taking part in village life. Her daughter and two grandchildren live nearby. Follow Lilian on Twitter @LilianHarry or visit www.orionbooks.co.uk to find out more.
GOR001169945
9780752882963
0752882961
A Penny A Day by Lilian Harry
Lilian Harry
Used - Very Good
Paperback
Orion Publishing Co
2009-01-08
352
N/A
Book picture is for illustrative purposes only, actual binding, cover or edition may vary.
This is a used book - there is no escaping the fact it has been read by someone else and it will show signs of wear and previous use. Overall we expect it to be in very good condition, but if you are not entirely satisfied please get in touch with us
Trustpilot