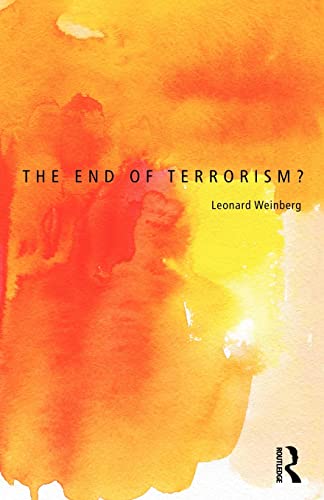 The End of Terrorism? by Leonard Weinberg (University of Nevada, Reno, USA)

The End of Terrorism? by Leonard Weinberg (University of Nevada, Reno, USA)

This book considers not the beginning or origins of terrorism but how groups that use terrorism end. Terrorism as a tactic is unlikely to disappear, however virtually all the groups that employed terrorist violence during the 1960s and 1970s have passed from the scene in one way or another. Likewise most of the individuals who embarked on 'careers' in terrorism over these same years now engage in other pursuits.

The author argues that al-Qaeda and the various violent Islamist groups it has inspired are, like their predecessors, bound to bring their operations to an end. Rather than discussing the defection or de-radicalization of individuals the book aims to analyze how terrorist groups are defeated, or defeat themselves. It examines the historical record, drawing on a large collection of empirical data to analyze in detail the various ends of these violent organizations.

This book provides a unique empirically informed perspective on the end of terrorism that is a valuable addition to the currently available literature and will be of interest to scholars of terrorism, security studies and international politics.

"This is a well-written book that will be of interest to general readers as well as scholars of terrorism and security studies. Summing Up: Recommended. All readership levels." - Choice, July 2012

"Written by a veteran scholar on terrorism, this is an insightful discussion of how warfare by terrorist groups generally comes to an end, based on an historical empirical examination of terrorism since the 1960s. Especially interesting is the author's discussion of the factors driving individuals who embarked on 'careers' in terrorism over the years to begin to disengage from violence." - Joshua Sinai, 'Terrorism Bookshelf: Top 150 Books on Terrorism and Counterterrorism', Perspectives on Terrorism, Vol. 6, No. 2 (2012)

Leonard Weinberg is Professor Emeritus at the University of Nevada, USA and a visiting professor at King's College, University of London, UK.

1. Introduction 2. The Ends of the Affair 3. Defeat 4. Success 5. Transformation 6. Conclusions

NLS9780415781183
9780415781183
0415781183
The End of Terrorism? by Leonard Weinberg (University of Nevada, Reno, USA)
Leonard Weinberg (University of Nevada, Reno, USA)
Extremism and Democracy
New
Paperback
Taylor & Francis Ltd
2011-08-18
156
N/A
Book picture is for illustrative purposes only, actual binding, cover or edition may vary.
This is a new book - be the first to read this copy. With untouched pages and a perfect binding, your brand new copy is ready to be opened for the first time
Trustpilot