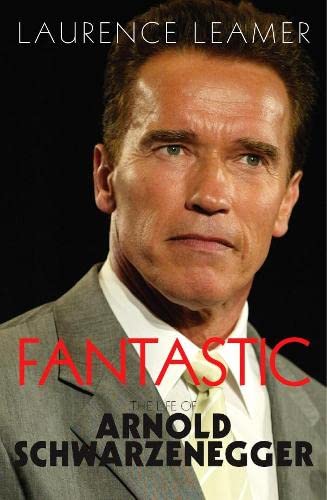 The definitive biography of Arnold Schwarzenegger, his rise to fame and power and his marriage to Maria Shriver

Fantastic: The Life of Arnold Schwarzenegger by Laurence Leamer

The life of Arnold Schwarzenegger is one of the most extraordinary success stories of our time. A scrawny boy from an Austrian village, he went on to become the greatest bodybuilding champion in history, the biggest movie star in the world, the Republican husband of a Kennedy princess and the popular governor of California. He may even become the president of the United States one day.

In this major new biography, acclaimed author Laurence Leamer tells the inside story of Arnold's remarkable rise to fame and power. Leamer has had exclusive interviews with Arnold Schwarzenegger and his closest associates, including his wife, Maria Shriver, Austrian schoolfriends, his mentors, bodybuilding competitors, lifelong friends, girlfriends, political rivals, agents, publicists and producers, many of whom have never been interviewed before. Fantastic paints the definitive portrait of the real Arnold - a man of immense discipline, wilful ambition and limitless drive. Leamer takes us from the untold story of his traumatic relationship with his father, to how his first mentor, a Jewish partisan in the Second World War helped shape him; from the movie star who tried to ruin his career to why Arnold overcame the sordid sexual revelations that marred his campaign for governor of California and the game plan that may bring him to the White House.

Insightful, highly entertaining, this book captures the public and private Schwarzenegger, a cultural and political figure unlike any other.

" No American immigrant' s tale of our time is more extraordinary than that of the man who is not only Mr. Universe Emeritus but also Hollywood' s beloved Terminator, California' s popular Governor, the star Republican of the Kennedy family and the nation' s possible future President: Arnold Schwarzenegger. Charting Arnold' s rise from the backwoods of Austria to the pinnacle of success, Laurence Leamer has written a modern Horatio Alger story that guides us through the hidden rooms of bodybuilding, action movies and finally politics in America in the 21st century. Rich with new interviews and sources, the book illuminates not only Schwarzenegger' s life, but the very process of achieving fame itself. Utterly fascinating, unflinchingly candid and relentlessly readable, "Fantastic" will be the standard by which all other works on Arnold Schwarzenegger are judged." -- Nigel Hamilton, author of "JFK: Reckless Youth""" " Balanced and insightful... a splendid account." -- "The New York Times Book Review" " A serious attempt to present a balanced picture of a man who, despite increasing doubts of Californians, is arguably America' s most popular (and certainly most intriguing) Republican politician." -- "The Economist"""" Provides rich insights into the conditions that have made Schwarzenegger what he seems to be, material that will no doubt form the basis for any subsequent biographies... . Leamer provides extensive details... persuasive." -- "The Washington Post"""" [Leamer] has done a splendid job... his book is fair andbalanced." -- "The New York Sun"""" [A] painstaking biography... Leamer achieves a depth of nuance." -- "The Daily Telegraph" (London) " Delicious... fascinating." -- "People "magazine " An impressive and substantial piece of work... " -- "Sunday Mail" (London) " Absorbing" - "The Sunday Telegraph" (London) " An even - handed assessment of the warrior king." -- "The London Sunday Times" " An exhaustively researched and richly detailed book." -- "The Sacramento Bee" " ["Fantastic"] sorts through the pulp and the fiction on a search for the real Arnold and... finds him... . Leamer skillfully sails between the idolaters and the iconoclasts, heading toward the multitude of readers interested in Arnold' s character and life." -- "Booklist" "" "Leamer is an assiduous researcher, and a master of narrative...FANTASTIC will certainly stand as a serious, fair-minded examination of a paradigm of self-invention, and a man whose success says something serious about America." --"Cox News Service" " Despite the cooperation Mr. Leamer received, his book is not hagiography. All his subject's lowlife moments are presented, from his cruel jokes and harassing sexual overtures to his obsessive narcissism." -- "Wall Street Journal" " Laurence Leamer' s lavish, well-researched rendition of the post-fiction, meta-narrative that is Arnold is an amazing feat." -- "New York Press" " (Leamer) is not starry-eyed about his subject - he really rather likeshim, which makes his objectivity all the more commendable." -- "The Financial Times" " Through Leamer's exceptional access to Schwarzenegger, the reader gains a more complete understanding of who he is. FANTASTIC is a rare opportunity to read a fairly portrayed account of Arnold, replete with entertaining stories and characters." -- "The Weekly Standard"
Laurence Leamer's previous titles include The Kennedy Women, The Kennedy Men and Sons of Camelot.
GOR001977020
9780330439626
0330439626
Fantastic: The Life of Arnold Schwarzenegger by Laurence Leamer
Laurence Leamer
Used - Very Good
Paperback
Pan Macmillan
2006-04-07
432
N/A
Book picture is for illustrative purposes only, actual binding, cover or edition may vary.
This is a used book - there is no escaping the fact it has been read by someone else and it will show signs of wear and previous use. Overall we expect it to be in very good condition, but if you are not entirely satisfied please get in touch with us
Trustpilot