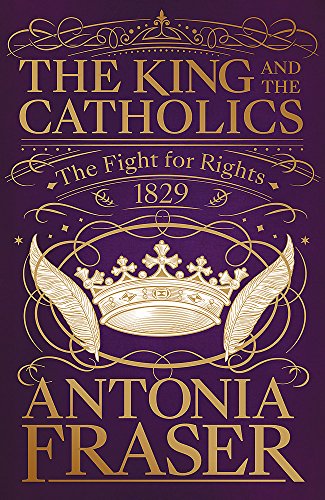 The King and the Catholics by Lady Antonia Fraser

From beloved historian Antonia Fraser comes the dramatic story of how Catholics in Britain won back their rights after two hundred years of official discrimination.

The King and the Catholics: The Fight for Rights 1829 by Lady Antonia Fraser

The story of Catholic Emancipation begins with the violent Anti-Catholic Gordon Riots in 1780, fuelled by the reduction in Penal Laws against the Roman Catholics harking back to the sixteenth century. Some fifty years later, the passing of the Emancipation Bill was hailed as a 'bloodless revolution'.

Had the Irish Catholics been a 'millstone', as described by an English aristocrat, or were they the prime movers? While the English Catholic aristocracy and the Irish peasants and merchants approached the Catholic Question in very different ways, they manifestly shared the same objective.

Antonia Fraser brings colour and humour to the vivid drama with its huge cast of characters: George III, who opposed Emancipation on the basis of the Coronation Oath; his son, the indulgent Prince of Wales, who was enamoured with the Catholic Maria Fitzherbert before the voluptuous Lady Conyngham; Wellington and the 'born Tory' Peel vying for leadership; 'roaring' Lord Winchilsea; the heroic Daniel O'Connell. Expertly written and deftly argued, The King and Catholics is also a distant mirror of our times, reflecting the political issues arising from religious intolerance.

Antonia Fraser is the author of many widely acclaimed historical works which have been international bestsellers. She was awarded the Medlicott Medal by the Historical Association in 2000 and was made a DBE in 2011 for services to literature.

Her previous books include Mary Queen of Scots, King Charles II, The Weaker Vessel: Woman's Lot in Seventeenth-Century England, which won the Wolfson History Prize, Marie Antoinette: The Journey, Perilous Question: The Drama of the Great Reform Bill 1832 and The King and the Catholics: The Fight for Rights 1829. Must You Go?, a memoir of her life with Harold Pinter, was published in 2010, and My History: A Memoir of Growing Up in 2015. She lives in London.

GOR009071888
9781474601931
1474601936
The King and the Catholics: The Fight for Rights 1829 by Lady Antonia Fraser
Lady Antonia Fraser
Used - Very Good
Hardback
Orion Publishing Co
2018-05-17
336
N/A
Book picture is for illustrative purposes only, actual binding, cover or edition may vary.
This is a used book - there is no escaping the fact it has been read by someone else and it will show signs of wear and previous use. Overall we expect it to be in very good condition, but if you are not entirely satisfied please get in touch with us
Trustpilot