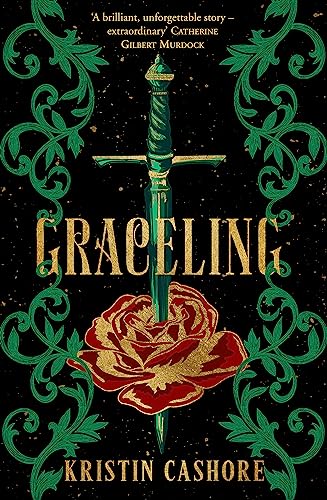 "Rageful, exhilarating, wistful in turns" (The New York Times Book Review) with "a knee weakening romance" (LA Times). Graceling is a thrilling, action-packed fantasy adventure that will resonate deeply with anyone trying to find their way in the world.

Graceling tells the story of the vulnerable-yet-strong Katsa, who is smart and beautiful and lives in the Seven Kingdoms where selected people are born with a Grace, a special talent that can be anything at all. Katsa's Grace is killing. As the king's niece, she is forced to use her extreme skills as his brutal enforcer. Until the day she meets Prince Po, who is Graced with combat skills, and Katsa's life begins to change. She never expects to become Po's friend. She never expects to learn a new truth about her own Grace-or about a terrible secret that lies hidden far away . . . a secret that could destroy all seven kingdoms with words alone.

Cashore's prose is smooth and unobtrusive. But for all its lightness of tone, Graceling is not a simple novel. indeed it deals with some very difficult subject matter. Its inevitable love story is sweetly unconventional and unabashedly feminist. Katsa herself is a rich character. The growth of her trust and self-esteem is the understated heart of the novel. This is always Katsa's story and enjoyable fast paced it is too. An immensely fun, good-hearted read. * SFX *
'Cashore creates believable characters with enough depth, subtlety, and experience to satisfy older readers . . . An impressive first novel. * BOOKLIST *
Graceling really does have something to offer everyone. An adventurous and enjoyable read. * DEATHRAY *
It's a great debut novel that will suit those who like their Fantasy unabashedly romantic. * SFFWORLD.COM *
The story flows at a decent pace with a story that gradually builds in intensity and a mystery that unravels at just the right speed to keep things interesting. Cashore knows what makes a good spectacle and, even though you know that Katsa absolutely has to win through, writes set piece scenes that buzz with excitement and action. * GRAEME'S FANTASY BOOK REVIEW *
A major strength of the writing is the imagery presented throughout the novel. The book is filled with very vivid descriptions of almost everything from castles, landscapes, courts, and the journeys that the characters go on. Kristin Cashore's 'Graceling' is a great start by a developing writer and I definitely look forward to seeing this writer grow with future novels as she shows tremendous potential. * FANTASY BOOK CRITIC *
KRISTIN CASHORE grew up in the northeast Pennsylvania countryside as the second of four daughters. She received a bachelor's degree from Williams College and a master's from the Center for the Study of Children's Literature at Simmons College, and she has worked as a dog runner, a packer in a candy factory, an editorial assistant, a legal assistant, and a freelance writer. She has lived in many places (including Sydney, New York City, Boston, London, Austin, and Jacksonville, Florida), and she currently lives in the Boston area. Graceling, her first book, was an ALA Best Book for Young Adults.
GOR011668257
9781473233256
1473233259
Graceling by Kristin Cashore
Kristin Cashore
Used - Very Good
Paperback
Orion Publishing Co
2021-01-07
400
N/A
Book picture is for illustrative purposes only, actual binding, cover or edition may vary.
This is a used book - there is no escaping the fact it has been read by someone else and it will show signs of wear and previous use. Overall we expect it to be in very good condition, but if you are not entirely satisfied please get in touch with us
Trustpilot