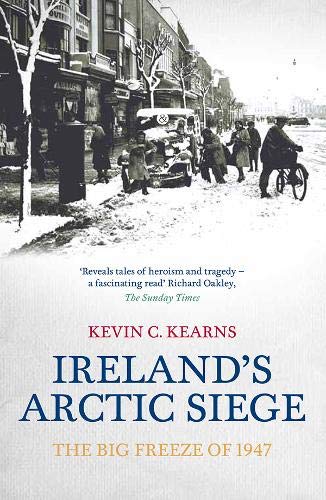 The Irish winter of 1947 was the coldest and longest of the 20th Century. Kevin Kearns gets behind the headlines to reveal in tremendous detail the hardship, depravation and loss of life that gripped a vulnerable country as a result of an extended period of freakishly cold weather.

Tragically this happened amidst the worst fuel crisis in Ireland's history. People were forced to strip wood from their homes, and nearly half of all Dubliners were burning furniture to survive. By 19 February 1947 Dublin's death rate had more than doubled as the poor and elderly succumbed to hunger, cold and illness.

Kevin C. Kearns presents a graphic account of what was regarded as a near-biblical calamity of blizzards, freezing, hunger, floods and threatened famine. This is a vivid tale of suffering and courage, death and survival, of human resilience and real heroism, poignantly authenticated by the oral testimony of those who lived through the arctic siege.

"Reveals tales of heroism and tragedy - a fascinating read" Richard Oakley, The Sunday Times
Kevin C. Kearns PhD is a social historian and professor emeritus at the University of Northern Colorado. He has made thirty-eight research trips to Ireland, a number of which were funded by the National Geographic Society. Of his ten books on Dublin, five have been bestsellers, most notably Dublin Tenement Life, which was number 1 on the Irish Times bestseller list for many weeks. He now resides in the coastal village of Camden, Maine.
GOR005724954
9780717154487
0717154483
Ireland's Arctic Siege: The Big Freeze of 1947 by Kevin C. Kearns
Kevin C. Kearns
Used - Very Good
Paperback
Gill
2012-09-28
304
N/A
Book picture is for illustrative purposes only, actual binding, cover or edition may vary.
This is a used book - there is no escaping the fact it has been read by someone else and it will show signs of wear and previous use. Overall we expect it to be in very good condition, but if you are not entirely satisfied please get in touch with us
Trustpilot