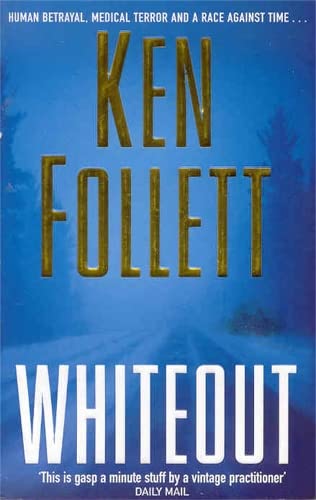 Human betrayal, medical terror and a race against time . . . 'this is gasp a minute stuff by a vintage practitioner' Daily Mail

Filled with startling twists, Whiteout is the ultimate knife-edge drama from Ken Follett - an international bestselling author who is in a class by of his own.

As a blizzard whips out down from north on Christmas Eve, several people converge on a remote family house. Stanley Oxenford, director of a pharmaceutical research company, has everything riding on a drug he is developing to fight a lethal virus. Several others are interested in his success too: his children, at home for Christmas with their offspring, have their eyes on the money he will make; Toni Gallo, head of his security team and recently forced to resign from the police, is betting her career on keeping it safe; an ambitious local television reporter sniffs a story, even if he has to bend the facts to tell it; and a violent trio of thugs are on their way to steal it, with a client already waiting.

As the storm worsens and the group is held under siege by the elements, the emotional sparks crackle and dark secrets are revealed that threaten to drive Stanley and his family apart for ever.

'A new breed of thriller...Follett drags readers to the very edge of their seats and holds them captive until the very last villain is satisfactorily dispatched' Publishers weekly

?Everyone likes a page-turner, and Follett is the best.?
?"Philadelphia Inquirer"

?Movie-style twists and hairbreadth escapes.?
?"Wall Street Journal"
Ken Follett was only twenty-seven when he wrote the award-winning novel Eye of the Needle, which became an international bestseller. He has since written several equally successful novels, including, most recently, Hornet Flight. He is also author of the non-fiction bestseller On Wings of Eagles.
GOR000355629
9780330490696
0330490699
Whiteout by Ken Follett
Ken Follett
Used - Very Good
Paperback
Pan Macmillan
2005-05-06
480
N/A
Book picture is for illustrative purposes only, actual binding, cover or edition may vary.
This is a used book - there is no escaping the fact it has been read by someone else and it will show signs of wear and previous use. Overall we expect it to be in very good condition, but if you are not entirely satisfied please get in touch with us
Trustpilot